Big in 2011: Curation and Consultation 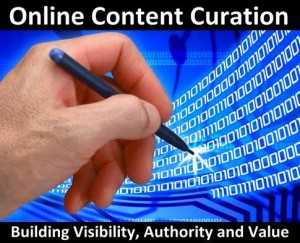 Over the past two months, I’ve bookmarked less than a half dozen articles as worth noting for the insights they provide. Looking back over them this past week, I’ve noticed two dominant themes that are core to the nature of collaboration and the social web. These two themes, curation and consultation, will both be key trends to watch in 2011. Here, moving backwards through time, are links to the five articles and the reasons why I rated them as keepers.

Writing at the beginning of this month, Paul Ford puts his finger on a core truth about the Web in an essay entitled The Web is a Customer Service Medium:

“Why wasn’t I consulted? … is the fundamental question of the web … Humans have a fundamental need to be consulted, engaged, to exercise their knowledge (and thus power), and no other medium that came before has been able to tap into that as effectively.”

Ford argues that every medium has one characteristic role that uniquely identifies it, and that the Web’s unique purpose is to give people a platform where they can register their opinion. This powerful idea immediately gives you a perspective on why some Web activities succeed so well while others flop — especially those involving social media.

A single sentence stood out for me in Erick Schonfeld’s TechCrunch prediction article, Seven Technologies That Will Rock 2011:

“Quora represents a bigger technology trend, which is the layering of an interest graph on top of people’s social graph.”

Quora, of course, is the question-and-answer site that has suddenly taken off since people realized how many well-placed technology figures were allowing themselves to be consulted through its medium. I liked Schonfeld’s notion of overlaying a map of people’s interest connections across the top of their social connections. It meshes very well with Ford’s insight that people like to be consulted. Quora is a superb, multi-level consultation engine (it excels at curation, too).

An end-of-year blog post by Bradford Cross discussing Why the iPad is Destroying the Future of Journalism delivered this superb aphorism:

In other words, people want information that’s connected (maps to their interests), which they can share (maps to their social graph), and which looks good (because it can). The old media models fail because they don’t address those mappings. They’re good at gathering information (curation) but not so good at personalizing it and allowing interaction (consultation).

The need for curation was summed up well I thought in a Thanksgiving-weekend blog post by Rand Fishkin, The Algorithm + the Crowd are Not Enough. It included this crucial wake-up call:

“I do think there’s an opportunity brewing for entrepreneurs, websites and companies to add editorial components to the algo-crowd paradigm.”

The old model of applying software algorithms to tease out useful information from the actions of the Internet ‘crowd’ has served many Internet ventures well. Fishkin cites Google, Amazon, Netflix and Facebook amongst others as examples. But he goes on to discuss others that are adding human judgment alongside algorithmic filtering — Quora, Techmeme, Groupon and Pandora are among the examples here. The more recent genesis of most of these names suggests that this is a new generation sprouting up.

The first article of this quintet was a mid-November blog post by Tom Foremski, entitled Curation And The Human Web…. Like Fishkin later in the month, Foremski writes about the limitations of machine-driven selection of content. But he also delves into how to make the two models work together, letting the machines automate as much as possible, leaving the humans to concentrate on the areas where they can contribute the most utility:

“The cheapest way to add a human layer is to improve machine aggregation by taking clues from what people do online, what they share, what they write, and what they discuss. That’s why tech companies talk about the “social web” and social graphs. These are ways of improving their technologies without having to employ people.”

So Foremski’s post too is about the intersection of curation with consultation, neatly concluding my collection of five articles.

Those are my picks. What do you think?

One response to “Big in 2011: Curation and Consultation”