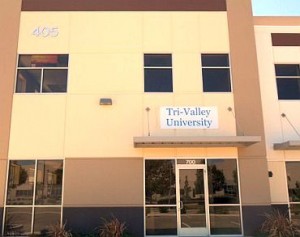 This could become one of the largest immigration frauds to ever hit the U.S. university system

With 95% of the students involved said to be of Indian origin, hundreds may face deportation

Tri Valley University, here in the Bay Area is involved in what might be the biggest immigration frauds with student visas. From The Hindu

When they launched a sting operation against Susan Xiao-Ping Su, the head of TVU, with undercover officers posing as foreign students, she was willing to offer them I-20, or student visas, even though they admitted they had no intention to attend courses and had improper status from previous schools.

Over 95% of the students are of Indian origin.

The TVU story is over. But the website is still up. It projects a strong association with “Christian education”. It won’t be the first operation to use religion as a cover-up.

God has been with us for every step the university takes. Initially starting with engineering program, Tri-Valley University quickly develop all of its academic programs in Christian ministry, business, law and medicine with helps and contributions from many faculty members, volunteers, as well as renown professionals.

TVU appears to be very new. They applied for accreditation in 2008. No news on whether it was received or not.

Because it is so new, it probably hasn’t graduated too many students, though there may be some who have transferred credits elsewhere. Those credits will be worth very little now.

TVU exploited the scarcity of US visas and Su’s ability to award them. There are many, many people around the world who want to get into the United States, somehow, anyhow. H1-B visas are already scarce. USCIS ran out of the 2011 quota on Jan 26. That F-1 visa is worth something, even if the education around it is a sham.

A similar thing happened in the early days of the IT boom in India. There weren’t enough engineering graduates coming out of colleges for the IT Services companies. Which led to the rise of the donation college – colleges that essentially granted you a degree in exchange for money. The quality of education itself was almost immaterial. The smarter colleges focused on getting employers to come for campus hiring. Then stick some kind of entry criteria at the admission level so that you aren’t admitting totally unemployable students and the virtuous cycle of good students – good jobs – more good students starts working in your favour.

Some day, there will be a shakeout in the engineering college industry in India. Supply will catch up. Salaries offered on campus will diverge. And the game will be over for the fly-by-nighters. But then the owners never really invested too much in education anyway. The students will be left up the creek without a paddle.

It didn’t have to be this way. If accreditation agencies in India took their job to be anything other than making money for themselves, you could still ensure quality education while growing supply. But then, that wouldn’t be India, would it.

[Update: ToI has the best piece on the TVU scam]