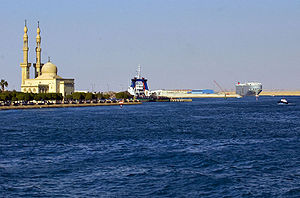 Like many in the US, I’ve watched intently as the protests and events in Egypt, Jordan, Tunisia and other North African and Middle Eastern countries have unfolded in recent weeks. The optimist in me hopes that the demonstrations and democratic progress (in Tunisia) will yield greater freedom, stability and prosperity for those in the region. But my pragmatist nature and academic training in history teaches me to believe something else entirely. Namely, that this is a region in the world that has only ever achieved stability through essentially dictatorial rule (Israel as the one exception) and where extremist Muslim undercurrents threaten to overtake any popular movement, even those that justly begin as democratic in spirit and mission. This is a risk factor that all companies should be taking very seriously when they consider the impact of not just localized supply chains in the region, but the potential for supply disruptions and price increases for key commodities on a global basis. We believe companies should consider the following three areas as a start when it comes to their general global supply risk analysis:

Oil prices and transportation cost implications: Instability alone in North Africa and the Middle East has already led to $100/barrel oil and over two-year highs. We believe prices in the $110/$120+ range are a possibility, should current protests and unrest continue without US, European or other intervention. The rise of additional protest movements in the region and any additional instability in Iraq, Iran or Saudi Arabia (unlikely, but given the current fervor in the region, anything is possible), could lead to even higher prices. This brings the potential an increase of already rising trade costs with China even higher, further curtailing the price benefits of global and low-cost country sourcing. Moreover, any direct or indirect byproduct/commodity tied to petroleum costs (e.g., resins/plastics) is likely to appreciate rapidly as well. In addition to resins/plastics, oil-based commodities include bulk chemicals, fertilizers, pesticides, waxes, lubricants, etc. Allocation-based supply market environments — remember 2008, anyone? — are a possibility companies should plan for as well across the spectrum of these and related commodities.

Suez Canal:The Suez canal links the Mediterranean Sea and the Red Sea. According to government data, 35,000 ships pass annually through its 120 miles. Despite its location in prime oil Middle East oil country, only 16% of its cargo represents petroleum-carrying vessels. Despite, according to Wikipedia, under international treaty it may be used “in time of war as in time of peace, by every vessel of commerce or of war, without distinction of flag,” if Egypt and surrounding regions fall into further disarray, safe and timely passage for container and other cargo ships is not assured. Given that much of the cargo passing through Suez is destined for global locations and the canal is an important link for China trade (especially European/China trade and African/Chinese trade), companies dependent on ocean trade lanes in this area should consider the added costs and time of re-routing cargo around Africa.

A Powder Keg in the Arab World — Escalating Conflict: The most dangerous, potential near-term risk we’ve seen in recent weeks is the potential for recent activity to lead to unrest throughout the Middle East and Northern Africa. The impacts could be massive — protests/violence/disruptions/war in or around Israel’s borders, the overthrow of Western-friendly/Western-neutral governments in the region and safe harbor for terrorists to plot activities against Western targets. Rising oil, energy and general commodity prices will only be the beginning, should unrest spiral out of control in a region in which the US, Europe and China — not to mention the UN — are completely unprepared to intervene on anything but a localized scale.

If you aren’t considering the implications of instability in Northern Africa and the Middle East in your supply chain risk planning, perhaps you should be. Where should companies get started on modeling potential impacts? Start by looking at the impact of rising commodity prices, extended lead times, logistical changes/bottlenecks, regional supplier stability, the safety of key supplier personnel and related areas. But above all, act now, before there’s no time for planning and the only option you have is a real-life supply chain fire drill.