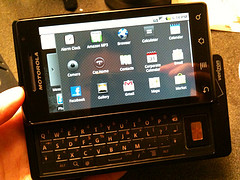 My wife came home with a Droid yesterday, which on one hand was pretty cool while on the other very disturbing as she is by no means a geek and not once did she ask for my opinion on this device. I suspect that some kind of counseling may be necessary.

Having had the opportunity to play around with the device I think I’m going to hold on to my iPhone for the time being. The Droid is really nice but it’s simply not appreciably better than the iPhone therefore it’s hard to justify switching.

My first concern, having seen the Droid only in press photos, was that the build quality was suspect but I’m happy to report that those fears are unfounded. The Droid is solid and conveys a sense of quality when held in your hands. The slider is smooth and the touch screen is crisp.

The camera is one area where the Droid excels compared to the iPhone. While it does have some latency that could disrupt your ability to get a shot “in the moment”, the quality of the images more than makes up for this negative. The flash and picture controls, white balance and color effect, are nowhere to be found on the iPhone.

I am not so enthusiastic about the keyboard, for several reasons. First of all, I’m not a big fan of the iPhone virtual keyboard but I do appreciate how it can be reconfigured for the app, such as offering a different layout when in the email address field as opposed to the body text, and when spun in landscape mode the virtual keys are plenty big enough even for folks with big fingers like me. You really do get used to it.

The Droid keyboard will no doubt please many and also be subject to the “you’ll get used to it” clause, but there are several design elements I just don’t like. The keys are flat, reminiscent of the laser etched keys on the old Razr handset, and while they do offer some tactile feedback (and in all fairness the iPhone keyboard offers no tactile feedback) it still isn’t enough to comfortably type without looking at where your fingers are going. The spacebar key is too small, which makes no sense because there are two unused key positions on the lower right and lower left of the keyboard; certainly they could have made that space bar larger by moving the ALT key left and right (there are 2 ALT keys, one on each side).

I found the keyboard keys to be really small for my fingers, and ironically I discovered that my typing speed and accuracy were greatly improved using the Droid virtual keyboard. This may be a simple transition issue for me, coming off an iPhone, that my wife who uses a Blackberry and never got used to the iPhone keyboard doesn’t experience.

The Google App Market needs some work, and this is probably the single dominant reason why I would not switch off the iPhone just yet. My favorite apps (e.g. Evernote and Tweetie) were not available and while promised I have long ago learned to judge application offerings on what is available rather than what is promised to be delivered.

I also found it interesting that many of the featured apps in the Market were priced in € and UK£. This is probably not a big deal from the standpoint on handling the transaction but is it really too much to ask that the storefront merchandizes every app in USD$ for customers who are clearly entering it through a U.S. carrier?

Aside from a couple of annoying usability issues (I still can’t figure out how to wake the device without opening the slider) the Droid is nicely designed and well appointed. The build quality is impressive and it feels substantial, and perhaps most importantly my first impression of it as an actual phone are pretty good although I would have to use it for a couple of weeks to really get the gist of integration of phone features in the apps (e.g. click on a phone number in an email to make a call).

In the final equation, the Droid is impressive for a v1 handset but it’s not enough to make me switch… yet. The openness of the Android platform is a big strategic advantage for Google and handset partners, providing they don’t allow the carriers to dictate what the handset can and can’t do from an app standpoint, but if allowed to develop momentum I could see this putting real pressure on Apple even among the hardcore user base.

One response to “My Droid Review”