As the debate continues over who will make up the next leadership generation at Microsoft, I was intrigued to read the two names first on Mary Jo Foley’s list yesterday of potential successors to Bob Muglia, the departing head of Servers and Tools:

“There are a number of in-house candidates that might be the kind of engineering-focused leader with a combination of cloud and server chops that Ballmer might opt to elevate if that’s the direction he’s leaning. I’ve mentioned Server and Cloud Senior Vice President Amitabh Srivastava as a possible presidential candidate. Others could include Microsoft Online Services Corporate Vice President Ron Markezich …” 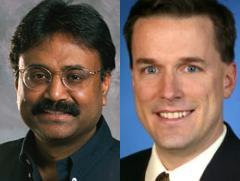 There are several pockets of true cloud savvy in Microsoft, and Srivastava and Markezich lead the two most important ones. I interviewed Srivastava in a two-part podcast shortly after the launch of Windows Azure, the project he has led since its inception under the codename Red Dog. I’ve had several briefing calls with Markezich, who’s always been aggressive in his positioning of Online Services against its rivals Google and IBM’s Lotus unit in the battle for your email.

Both these men lead teams that understand exactly how the cloud works. Azure, despite the best efforts of the Microsoft establishment to derail it into on-premise iterations, is a true cloud platform and has injected a huge amount of cloud savvy right into the heart of Microsoft’s engineering corps. Microsoft Online Services is a cloud enclave in the business applications homeland, where both engineers and product managers understand that cloud isn’t just a tactical deployment option, it’s a strategic enterprise lifestyle choice. [Disclosure: I have a paid speaking engagement at a Microsoft Office365 event in Europe this April].

For all the brave talk we’ve heard that Microsoft is “all-in” the cloud, the political battles for hearts and minds within the organization are still raging between the old guard and the new wave. Seeing either of these men step into the top seat at the Server and Tools division would be a hugely meaningful signal that the ‘cloudies’ had finally won that struggle for dominance.

So which one will it be, if it’s either of them? Srivastava comes across as the more laid-back of the two, but his engineering credentials are impeccable and he commands huge respect. He’s the man to pick if the key battle still to fight is to win over the engineering and product teams. Markezich comes across as much more driven, and I’ve found him entertainingly outspoken in his sideswipes at rivals on the occasions we’ve met. Of course, that kind of talk can rebound on you, and although it makes for good copy, I always have some inner pangs of regret when an online provider crows about a competitor’s outage, because it’s only a matter of time before they’ll have a #fail of their own. But Markezich’s energy and the sales progress made by Online Services may be a better fit for CEO Steve Ballmer’s personal style, and will favor him if winning over the sales and account management teams is what counts now (which I suspect is the case).

Whatever transpires, it surely couldn’t have been mere coincidence that, while all this was going through my mind, last night I noticed Markezich had posted an item to the Why Microsoft? blog titled When Success is a Marathon, Not a Sprint. Amidst all the alleged succession machinations at Microsoft, it surely does no harm to his aspirations to remind a few people just now of his stamina, track record and enterprise cloud credentials. No doubt Srivastava is working equally hard in his own quiet way, but Markezich has made his determination and ambition very public:

“Any serious athlete will tell you that champions are made when no one is watching. When the noise dies down and the crowds thin out, all that’s left is your will to win and the long stretch of road ahead. That is the time I like best. Time to listen. Time to focus. Time to work hard. And time to run.”