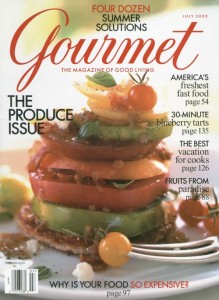 It’s not often that I disagree with Mike and I am not ready to fully do that here but he is not fully centered on the core issue either.

[From Cook’s Illustrated Editor: I Wish All Those Amateurs Out There Would Just Shut Up | Techdirt]

The underlying issue that Kimball is pointing out is that the internet has become one great big !%$@$^ book club… everyone has to have an opinion about everything (don’t think I don’t realize the irony of ME writing THAT sentence). Kimball’s point is that real expertise is acquired through great effort, not just through the ability to peck away on the keyboard and hit publish, and that authority directly correlates to the relationship you can expect with your audience.

The second point that Kimball is right to make is that advertising has been the seed of destruction for magazines in the food space, but more broadly I would say across the board. Taken online the display advertising model deployed by the vast majority of publications is simply unsustainable and in the process they are destroying the delicate balance between content and advertising.

Case in point is the restyled Bon Appetit magazine, which has gotten really light on content and really heavy on advertising in all forms; if it takes you more than 15 minutes to read the last issue I would be very surprised, and color me shocked when advertiser products are rated “top 5″ out of, say, 7 tested products. It’s almost as bad as automotive magazines where no product is ever rated “don’t buy this piece of shit” because every possible product is being advertised in the magazine.

The fascination with lifestyle has also distorted Bon Appetit and alienated their core audience… who I cannot imagine are really that interested in celebrity chef interviews. The remake process for Bon Appetit probably resulted in a more intense discussion of what type of typefaces they would use than what type of content they would be providing their subscribers.

Cooks Illustrated goes into excruciating detail about food and how the process of preparing is affected by the chemistry of food. I have subscribed to this magazine for years and marvel at the lengths to which they will go to find the ideal process, ingredients, and tools, all the while challenging the conventional wisdom about what is the proper method. When it comes to presenting food expertise it is without question that serious foodies, professional and amateur alike, will agree that Kimball has earned his stripes in the expertise department.

Secondly, Cooks Illustrated does not have any advertising, it’s entirely content driven, and what that means is that Kimball’s interests are completely aligned with that of his readers. His is the only publication that I know of that actually has a “not recommended” category for product reviews, and they don’t hesitate on recommending products that are cheap grocery store staples if in fact they are the best ingredients based on taste.

Mike is right to point out that Kimball comes across as a petulant snob with nothing but disdain for food blogs and websites, but Mike fails to acknowledge the broader point that Kimball is making, which isn’t just about defining your brand, that the internet has devalued authority. This is a point I think we can all agree is an issue to be resolved (the measurement of authority).

Where we end up is at an interesting intersection triangulated at by both pieces, which is that the internet has not destroyed traditional publishing but rather exposes the vacuous nature of many established publishing brands. This leveling of the playing field has followed the path that many technology dependent industries have followed, which is that distribution and gatekeeping is increasingly not the dynamic that your business relies on but rather the ability to engage and sustain a valuable audience. Given Kimball’s resume and actual experience in building Cook’s Illustrated, I think he is exceptionally well qualified to opine on the state of affairs but like Mike I would appreciate a little more humility in the process.

Lastly, this is a very interesting discussion because with newspapers dead set on charging for online content we are going to see in realtime what the relationship between newspapers and readers really is.