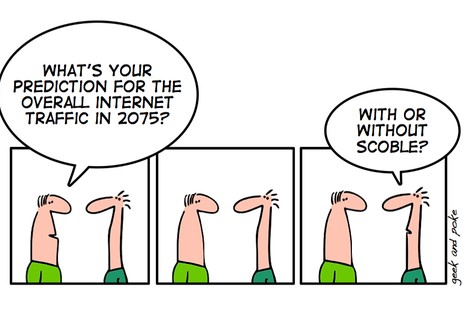 I just listened to Scoble’s bar interview of @longview (Nick Long) and @renatto (Paul Robinett), two Dreamworks developers who are building a mobile app of their own.  They’re talking about the Mobile World, and there are some great sound bites coming from the interview.  BTW, the Cinchcast tool he used to do the interview was pretty cool.

These developers conclude Nokia-Apple are “screwed”, Android is the cutting edge, yada, yada.

–  The constant refrain: “No one is developing apps for X”.

–  It’s costly to learn a new platform.  Android has Java.  If you know Java and have to learn Objective-C that’s hard and vice versa.  You have to hire a new programmer.

–  It’ll be hard for developers to straddle 2 platforms and 3 is impossible.  How can there ever be a #3 of any consequence?

–  You have to pay us up front enough so it wouldn’t matter if anyone bought the platform.  Because they can’t guarantee the distribution.

– Cool is about openness, not about closed.  The big momentum is with Open on Android.

–  The Cool Kids want to be on the cutting edge, but that’s slowing down a little bit for Apple.

–  When somebody builds the uber cool app on Android first, that shift away from Apple will be here.

–  Scoble’s advice to Microsoft, get rid of Windows and go XBox.  They may have been too long in the bar at this point!

–  What if the Apple store is full of hundreds of thousands of apps, and you’re lost in that sea of apps.  How about a marketing decision to launch on Google first so you stand out?

Takeaways for Once and Future Platform Kings

I am a developer and have worked with developers for my entire career in a variety of different markets.  I’ve also spent a lot of time doing the “impedance match” between marketing/sales and developers, and formulating winning product strategies in new markets.  Let me tell you it is an interesting challenge to juggle all of those balls just because of how the various players think and are motivated.  It’s worth getting behind the sound bites of this interview and understanding the developer, marketer, and strategic implications for companies who want to be Platform Kings.

Let’s start with the marketing / strategic perspective for the mobile world.  It’s all about the apps you have on phones, and Scoble gets this in a prior blog post very eloquently:

Apps are the ONLY thing that matters now.

Why? Because when a customer, whether in Cape Town or San Francisco or Tel Aviv walks into a store to buy a smartphone they will NOT want to feel stupid.

What makes you feel stupid when buying a Smartphone? Buying one that doesn’t have the apps your friends are taunting you with.

Apps need a platform, so if you’re going anywhere in these markets, you’d better have one that will attract the right apps.  Unfortunately, it’s getting late to try to establish a new platform.  Why?  Because the developers are in control of whether or not apps will appear on your platform, and you will have a hard time attracting them.  Many companies are woefully unprepared for the idea that if they’re in the platform business, they actually have two sets of customers.  First are the people that buy the phones.  Those are the obvious customers, the ones marketers at companies like Nokia have built their entire professional careers learning how to deal with.  Second are the developers that bring the apps.  These are the customers many of these companies have no earthly idea how to deal with, yet they are the gate keepers for the apps.

So how do we think about developers as customers and how do we get them to adopt our platforms?

There are a very limited number of opportunities to attract developers because they are so schizoid about new platforms.  On the one hand, developers really hate having their expert status reset to beginner while they learn a new platform.  They may protest that its cool, they’re always learning new things, they love to learn, yada, yada, but they really hate the nuts and bolts of the learning.  This is a corollary of what happens when you give a developer somebody else’s code to maintain.  The code may have come from their most revered uber geek hero, but if they don’t know that’s the source, their first words on briefly looking over the code will be, “This code is shit–we have to rewrite it.”  Welcome to the real source of NIH.

So what will get a developer to voluntarily surrender his Uber Geek status for the time it takes to learn a new platform?

There really are only two things.  Either that platform is so hot and sexy they will lose their Uber Geek status anyway if they don’t learn it, or the platform is so successful that profit motive dictates it must be supported.  Are you beginning to see the problem with introducing a new platform?  It hasn’t been around long enough for profit motive to kick in, so you have to make sure it isn’t just a little bit cool, it has to be ultimately way-over-the-top-super-duper-no-kidding-insanely-friggin-UBER COOL.

This has been Steve Jobs genius.  He has managed to create such platforms multiple times in his career.  That’s no small accomplishment, and I don’t know whether we’ll ever see it again in our lifetimes from someone else.  The Apple II.  The Macintosh.  The iPod.  The iPhone. The iPad.  Dang Steve, that’s gettin’ jiggy with it.

When the corpocracy wants to roll out a new platform, that’s what they’re faced with.  There are a limited number of things the Corpocracy (my term for that faceless Big Business  thing the lady in the Apple 1984 commercial threw her hammer at) can do about this.  The best one is to make their platform absolutely compatible with some other platform so that developers don’t have a long learning curve.  We’ve seen a lot of those kinds of things going on in the industry.  It’s one reason why some things just won’t die.  Sometimes it works to give away the platform, and make it open.  It’s helpful if in the process you can make it as compatible as possible with something developers know.  Enter Android with a lot of Java inside.

That’s about it.  If you can’t make your platform fit those molds, you’re probably not going to be a Platform King.  Not enough developers will learn your stuff no matter how great it is because it was either not sexy enough or didn’t already have a big enough installed base.  The latter, BTW, is why Gordon Moore says it is better to go from app to platform than vice versa.  At least you’ll have the installed base and ecosystem of the app users to drag developers onto the platform.  They come to make the app users happy if there is enough motivation in that.  But this does not necessarily a huge platform success make.  This is the problem Salesforce struggles with in Force.com.

Getting back to the Scoble interview, are these developers right, is Nokia screwed?  And whither the other mobile platforms?

Because developers have this big speed bump in their willingness to learn new platforms, they will tend to create sub-cultures that don’t communicate very much.  Right now we have a huge division between the Unix + Open Source world and the Windows + .NET world, for example.  Only a very small number of developers can claim to be Uber in both camps.  The vast majority know very little about the camp they are not Uber in, and often hold it in extreme disdain as a result.  But that does not mean they’re right.  It only means you have to understand where those boundaries are and what they mean to the success or failure of your product strategy.

Translation:  don’t ask a set of developers about whether a platform they will have to learn will succeed unless all you care about is whether they perceive it as cool.  They don’t know much else.  It’s all religion to them.  Despite the fact they are engineers, very few will look at this sort of thing objectively.

In fact, Microsoft may have the only viable alternative platform opportunity that will work for mobile after Apple and Android.  Why?

Because there is a large community of developers who don’t have to relearn their tools.  To the extent the phone platform can minimize relearning and appeal to that group, they’re in.  It would be ideal if Microsoft can also create the commercial reality of a big enough market.  In fact, that will be a requirement in the long run.  But in the short run, Microsoft needs to stimulate some innovative hit apps on the platform that show life and prime the pump.  Steve Ballmer, if you’re listening, that’s the most valuable thing the billions you spend on R&D could purchase.  Bring 3 to 6 hip, really cool, must have apps to your platform so your customers don’t have to feel stupid (ala Scoble and mobile phone apps) and you have a chance.  While you’re waiting for that lightning to strike, at least make sure you have apps that give great experiences for all the key hip web properties out there, such as Facebook and Twitter.  And with whatever cash you have left, make sure your phone platform is minimizing the speed bump for .NET, Windows, and XBox developers to put apps on your phones.

It’s not too late, but it is far from early.

This community of developers who know Microsoft platforms is one of the under-served markets I alluded to in my article saying that Nokia-Microsoft are filling the last of the 3 winning market strategies.