The secret to following lots of people on Twitter 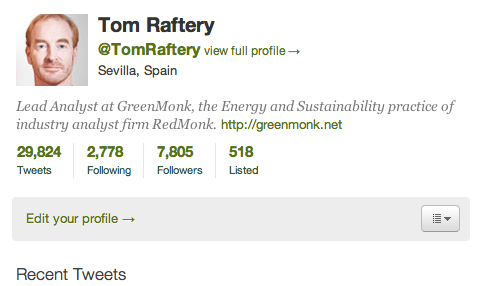 What is the best way to make sure you get the most information out of Twitter? Follow lots of relevant, interesting people!

It sounds obvious (if you aren’t following people, you won’t see their posts) but I see lots of people on Twitter who are following 100 people or less. Many of those 100 will be friends and family, others will be infrequent posters so out of 100 accounts, you are lucky if 20 are regular sources of good information.

Now, what if you increase the number of people you follow to 200? Or 2,000 (I’m currently following 2778)? Well then, the number of friends/family type accounts you’re following is unlikely to increase proportionally, so as long as you chose the people to follow wisely, you will vastly increase the amount of interesting news you will be receiving from Twitter.

Now, I often hear people say they have difficulty keeping up with the number of people they are following and asking me how I follow over 2,000. The simple answer is I don’t try to keep up with all the people I follow! I dip in and out of Twitter and if the people I follow happen to post, I will likely see the post. If they post when I am not looking at Twitter, I probably won’t see their post.

The major limiting factor in trying to follow more people on Twitter is obsessively attempting to catch every tweet. Let go. Learn to live in the now and more than likely if you do miss an important tweet, it will be re-tweeted anyway.

Of course, a flipside to this is that you shouldn’t follow people simply to increase the number of people you are following. Only follow people who will bring you useful/interesting information – otherwise you are reducing the signal-to-noise ratio and similarly if you realise that someone you followed is not bringing you any value, don’t hesitate to unfollow them.