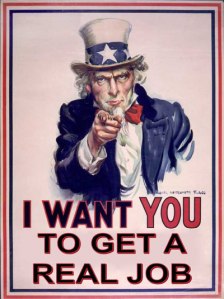 What do you suppose 12 Tech CEO’s and VC’s discussed with President Obama at their dinner?  Many things, I suppose, but  almost certainly there would’ve been a discussion about the job situation.  More than likely this was focused around Obama’s interests in improving education and US competitiveness.

I was shocked to get a note from LinkedIn saying nearly 1/3 of my contacts have found new jobs in the last year.  That doesn’t cover those who have not yet been able to find new jobs.  I regularly talk to smart people from tech who been out of work for approaching a year now.  Heck, I’m one of them.  I can’t remember a time in this industry when that was ever true.

Larry presents the following list for his “stunning omissions”:

Here’s my problem with the lists.  For the most part, they’re very bright, very successful Captains of our Tech Industry, but these people are not connected with the end of the economy that produces the jobs.  Therefore, it isn’t clear to me they have much to tell Obama about how to fix the jobs situation.

As I’ve written before in response to Intel’s Andy Grove, Big Companies are not the job creators in our economy. In fact, we can argue about whether even the VC’s, like John Doerr see the bulk of job creation in from the companies they fund.  If you click over to my Andy Grove piece, you’ll see that the vast majority of jobs are created by brand new companies that have less than 20 employees.  It seems the longer companies are around, and the bigger they get, the less likely they are to be net job creators.

It’s pretty simple to understand, if you think about it.  After all, many of the things that result in fewer jobs are unique to larger organizations:

–        Small companies don’t have huge piles of captive profits overseas that they can’t repatriate for fear of paying taxes on them.

–        Small companies don’t spend a fortune automating in order to get by with fewer jobs.

–        Small companies don’t have billions in the bank and billions more for shareholders to squabble over.  They spend over penny to keep going and growing.

Small companies just don’t have the critical mass to cut jobs.  They’re too busy trying to grow and generate the critical mass.  Now granted, there were people at the dinner who have experience with companies at that scale, although not all the attendees do and I’m not sure how much experience they have with such companies.  But collectively, they have a lot more experience and expertise doing the things that big companies do.  And their own agendas and enlightened self-interests are unlikely to be well aligned with doing anything that helps small companies at the expense of their big companies.

As a country, and particularly for politicians like President Obama, it’s hard to come to grips with this stuff.  We like to hear about the biggest baddest companies in the land and their leaders.  We like to think that we could fill a room with a handfull of power players, and accomplish anything.  People like these dinner guests.  We like to think that bigger is better.  If we only spend enough money on research and development, we will have innovation and that will lead to jobs.  But there is little evidence to bear this out.  Microsoft spends billions on research and development, yet is widely regarded as not particularly innovative.  Apple actually spends a lot less, relatively speaking, and is very innovative.

Shortly after the Tech Supper, President Obama met with Paul Otellini of Intel, and there was much talk of a new chip fab in Arizona and all the jobs it would create.  BTW, if you look at the numbers, it will ultimately cost Intel $5 Billion to create 1000 permanent jobs.  So creating a job costs $5 Million under that plan.  I think it’s great to have more chip fabs in America, but do you think we could manage to create more than 1 permanent job if we had $5 Million to spend on small business?  I wonder how many jobs someone like Paul Graham (who would’ve been one of my picks for the Supper) with the Y Combinator-style incubator could create per $5 Million?

Otellini has said that Obama (in fairness, he said Democrat dominated Washington) doesn’t understand what it takes to increase jobs.  He’s on the right track when he says our problem is too much regulation.  He claims it costs $1 billion more to build a factory here largely because of taxes, regulations, and legal issues.  Fellow semiconductor executive T.J. Rodgers says it isn’t that US labor is so much higher, it’s anti-business laws.

I couldn’t agree more, but here is the rub—it’s much worse for small business to afford this overhead.  They don’t have the luxury of building their multi-billion dollar factory overseas.  Whatever they’re going to do must be done domestically, or they can’t even begin to exist.

What the Tech Supper Club should have been discussing is how to change that anti-small-business environment for the better, even if it means tilting the tables so things are a little worse for big business so that small businesses can be stimulated.  What are the chances that audience was that enlightened?

The reality is a lot of the issues could be fixed for both large and small, but a lot of them can’t be.  We need to fix our runaway liability system, and that will benefit both.  We’ve seen too much mischief and mayhem from runaway deregulation, so I’m more skeptical about fixing that for big companies and particularly for anything approaching a monopoly of anything.

But what we could do, rather than eliminating laws like Sarbanes-Oxley entirely (adds a huge overhead to public companies and is partially responsible for the drastic reduction in Tech IPO’s), is point the laws at the big companies and let the little ones off.  After all, SOX was a response to Enron which was many billions in revenue before it ever got up to mischief.  To think the population’s widows and orphans are at significant risk from a $100M a year software company is a little bit silly.  Yet that small company pays 6% of its revenue to deal with SOX compliance alone.

There are a lot of creative things that could be done to clear the way for small companies.  Fix SOX. Do some liability reform that benefits smaller players while continuing to hold big players accountable.  Fix the patent system so trolls can’t touch the little guys.  Reduce the health care costs for small companies by having insurers combine them in pools with big companies.  Quit regulating small companies in general so much and quit politicizing the dole when it comes to things like small business loans.  These are just a few of the possibilities.

If we successfully ignite a boom for small business through such measures, everybody would win.  We would create many jobs—in fact this may be the only way to dig ourselves out of the job deficit.  We would stimulate the heck out of the economy.  Big companies would boom too as a result.  Innovation would be restored.  It’s always been a function of sowing a thousand seeds and waiting to see where the flowers bloom.

We bemoan the loss of our middle class, but they’re the ones who largely create, own, and run small businesses.  Can we help them out?  That’s the fastest way out of this job crunch.