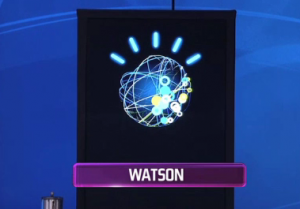 Last week five other VCs and I were invited by IBM’s Venture Capital Group to a private viewing of Jeopardy’s final round where Watson was competing.  Following the show, and Watson’s win, we engaged in a very interesting conversation with Eric Brown, Watson’s technical lead, and Anant Jhingran, CTO of IBM’s Information Management Division, about the potential applications of the technologies that made Watson’s win possible.

Let’s first talk about the overall system.  Watson is a question-answering system that represents 100 person-years effort by a team of 25 IBM scientists.  Watson is running on 750 Linux servers with 2880 cores, 15TB of RAM and providing 80 teraflops of computing.  Its software architecture is based on UIMA and integrates a variety of machine learning algorithms that have been used to develop approximately 3000 predictive models.  These models are running in parallel every time Watson is trying to answer a question. The predictive models were tuned over several months by utilizing Watson’s results from a series of 134 “sparring matches” with past Jeopardy winners. Watson’s “knowledge base” was seeded with 70GB of curated, i.e., noise-free, full-text documents and eventually grew to 500GB, consisting of additional curated documents and information derived from the seed database.  The final knowledge base represented approximately 200M pages of textual content.  The text data was preprocessed using Hadoop.  However, Hadoop was not used while Watson was competing in Jeopardy.  Watson’s knowledge base also included various sets of handcrafted rules including rules that provide clues on what to look for and others that describe strategies on how players select within a category so that they can find Jeopardy’s daily double.

Watson operates through a cycle of hypothesizing an answer, gathering evidence that supports each hypothesized answer, evaluating the probabilities associated with the collected evidence and proposing the final answer.  As audiences discovered over 3 days of play, all this is done in “warp” speed.

There are several reasons of why we should care about Watson as a Big Data analytics system.

Of course IBM is very interested in business applications of the technologies that made Watson so successful.  These application areas must involve the use of complex language, including the use of such language in the data to be analyzed, the need for reaching high-precision responses/decisions/actions using ambiguous and noisy data, as well as the need to provide responses with confidence in real-time.  Some initial application ideas we discussed following the show included:

The business model under which to offer Watson-like technology is another issue IBM is thinking about.  Should such a system be offered as a service or as on-premise software?  Of course it will depend on the application.  One of the ideas we discussed was to run Watson as a service and charge by the difficulty of the question asked or the importance of the answer provided.  This may be something that IBM can do for medical applications, for example, in collaboration with its traditional partners Mayo Clinic and Cleveland Clinic.

The Watson team deserves all the kudos they have received.  Not only for their win in Jeopardy! but, more importantly, for their technical accomplishments, the water-cooler discussions that resulted the day after each broadcast which will hopefully make more people (particularly young people) interested in technology and engineering, and the technical conversations they motivated among engineers and scientists about what is possible regarding big data analytics and human/machine interactions.

One response to “Watson on Jeopardy! Big Data Analytics and User Experience”