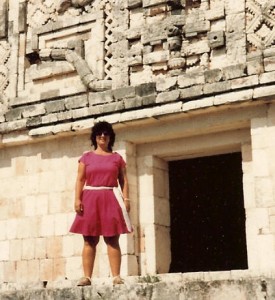 When I Could Still Climb Mayan Pyramids

Many of you know that I’ve been doing a ton of briefings/demos with HRM software and services vendors this quarter, with many more to come.  So let me start this post with a major shout-out to all the vendors with whom I’ve met and will be meeting for their time, their preparation, and their courtesy.  I know that it’s a major draw upon vendor leadership time to keep all we so-called influencers informed about their business, their products/services, and their industry perspectives, and I for one am very grateful to everyone involved in these briefings.  Hopefully I’m giving as good as I’m getting so that their time is as well-spent on these calls as is mine.

One of the questions I always ask vendors, as context for learning about their business and products/services, is “what is your ambition?”  Ambitions for organizations change over time, and they should do so as competitive, industry and organizational changes argue persuasively for such changes.  It’s a wise leader who is realistic about what it will take to realize their ambitions and the extent to which their assets are sufficient and a good fit for doing so.

Within the HRM software/services industry, we’ve got leaders with enormous ambitions in whom we have confidence of their achieving them because they bring so much to doing so in terms of experience/track record, financial resources in hand or easily obtained, and tons of talented people ready to follow them wherever they lead.  And then there are those leaders in our industry who have squandered their assets, damaged the talented people who found themselves working for them, and never come close to realizing their ambitions because of their own fatally flawed  KSAOCs and decisions — and their inability to adjust their ambitions to fit their capabilities.

And then there’s Naomi.  One ambition I had personally and did achieve before my legs stopped working well enough to do it (which adds the dimension of timing, because ambitions must evolve to meet the current reality, or at least they should) was to climb a number of the more remote Mayan pyramids.  Professionally, one ambition I set for myself in 1987 when I started my solo practice was to help change the practice of HRM from a focus on administration with an emphasis on labor cost control and systems which were basically file cabinets and payroll calculators to a focus on achieving business outcomes via integrated strategic HRM processes enabled by systems that managed KSAOCs as their core, with all that implies.  I know that I wasn’t the only voice pushing for these changes, but I will take a tiny bit of credit for the fact that most of today’s HRM systems are KSAOC-centric, focused heavily on enabling strategic HRM processes, and very much attempting to drive business outcomes via improving workforce decisions.  Climbing those pyramids and seeing my fingerprints on a good bit of today’s HRM software are two ambitions realized, each in their own time and each requiring me to make fundamental choices about what I would do and, VERY importantly, what I would not do in using my own limited resources and KSAOCs to achieve my ambitions.

This is why I’m so interested in each vendor’s ambitions as a backdrop to learning about their strategies, products/services, target markets, etc. etc.  Those ambitions really matter when you evaluate a vendor’s viability, their likelihood of acheving those ambitions, as you look at their organizational assets, their bench strength, their software assets and services infrastructure along with their intellectual property.  Successful organizations are those whose assets are sufficient to realize their ambitions — how obvious is that! — but it’s always amazing to me how many organizations (and people!) are out of sync on this point.  And if you’re a buyer of HRM software/services, you’d better keep a very careful eye on this point to ensure that, as they pursue their ambitions, your vendors are serving yours.

There’s no such thing as a correct ambition, but there are viable combinations of ambition and assets.  Do you know the ambitions of all of your HRM software /services vendors?  Do you know how well they are doing against those ambitions?  How good a fit are their assets for achieving those ambitions?  Have you matched the ambitions of your vendors, presuming that they are moving toward achieving them successfully (because you certainly don’t want to rely on vendors who are failing to do so), to the role that their products/services play in your HRM delivery system?  Have you bet the farm on a vendor’s failed (or likely to fail) ambition to run/grow/dominate the HRM delivery system platform?  Does one or more of your talent management “best of breed” vendors fit the profile of built to be bought, whether deliberately so or because they’ve failed as a run/grow/dominate business?  Just as I want to understand the ambitions of the vendors/providers with whom I’m taking briefings so that I can look at their products/services etc. against that backdrop, so too should buyers of these products/services take a hard look at the fit between what they need and what they vendor/provider’s ambition will lead them to deliver.  Ambition does matter!