Let’s Not Boil This Frog 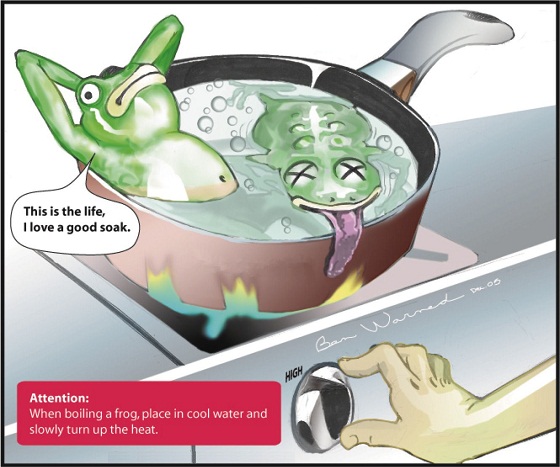 Those are the two most common responses to crises — acute and chronic.  The frog responds to the acute crisis and lives but fails to mount an adequate response to the chronic crisis and perishes.  This phenomenon is not limited to frogs, in fact, we have enshrined the idea in common parlance.  Ever hear someone say, “If it ain’t broke, don’t fix it?”

The problem with waiting until something breaks in the modern world is that when failure comes it is often catastrophic.  And while we respond to the catastrophe the response is often more expensive and more disruptive than if the response had been made when the problem was simply chronic.

So, perhaps a city or a state foregoes maintenance on a bridge because the money simply is not available and no one can stomach the fight over raising taxes.  There’s a modicum of safety or extra tolerance, built into most engineered things like bridges but eventually if left alone the margin is exceeded and you end up with a bridge in a river.  We’ve seen it happen before.

But this column isn’t about bridges, it’s about CRM and even here the frog has something to teach us.  Two years ago we saw transportation fuel prices rise to levels that choked off economic growth.  We had a recession — brought on by other factors as well — but we survived.  We’re now seeing energy prices climb again almost to the same levels that we last saw in 2008.  There is a direct link between increasing economic activity and energy use.  Increased energy use is a barometer of economic health but increasing prices is not, it simply causes inflation and chokes off growth.

Last week we saw gasoline prices rise by twenty cents in most areas and now food prices are taking a hit from the combined high price of transportation and bad weather.  The situation looks like a chronic crisis morphing into something acute.  There is no silver bullet for this situation but there are many small steps that we can all take to stave off the worst effects of a crisis.

In business we can all look for and find ways that are fairly easy to reduce our business processes’ need for transportation.  To name some there are virtual conferences, unified communication servers for virtual communication, video produced to support sales, marketing and service and don’t forget analytics and social media.  There are also new work strategies that blend some job functions to better leverage these technologies.

It’s all low hanging fruit and this is the way that free markets work or the way they should work.  As many people examine their own situations and then evaluate new strategies and available solutions, a crisis can be averted.  But we have to abandon the mid set that lurches us from crisis to crisis and accept the idea that even absent a full-blown catastrophe something is broken.  If enough of us take this approach we can generate the stimulus we need to grow the economy and turn adversity to advantage.

One response to “Let’s Not Boil This Frog”