The SAP BI 4.0 Launch in Review – More than Happy Talk? 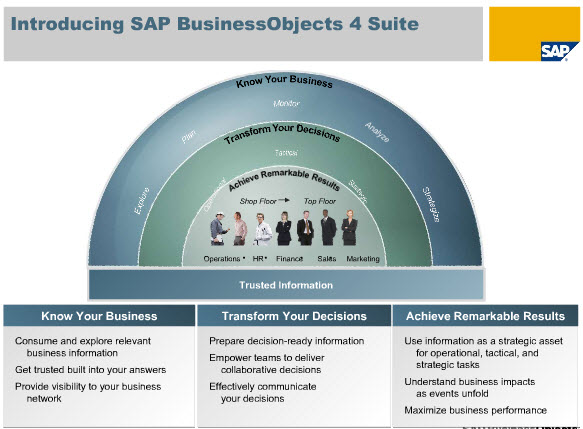 For me, last week was about trains, Marriotts, and rapid-fire SAP events. One biggie was the BI 4.0 launch in New York City. The launch was embedded into the Run Better SAP event that took place in New York City on February 23. I attended SAP’s blogger track for the event, which spanned two days and included additional deep dives, customer interviews, and influencer sessions that produced their own sets of highlights and lowlights. Prior to arriving, I heard the usual skepticism from fellow “influencers” about whether the 4.0 event was really a newsworthy SAP event.

Understandably so, as this event was timed with the 4.0 “ramp up” (30 customers) rather than a General Availability (GA) launch. The actual “news,” from the standpoint of the press releases issued at the show, was a bit thin for the fanfare. Nevertheless, I saw a lot of happy SAP BI talk during and after the event. Enough to make me want to drill into the burning questions not yet answered.
Part of the hoopla was SAP’s virtual coverage of the event, which included live streams of the keynotes. As we’ve all learned the hard way, virtual event coverage has ups and downs. BI 4.0 fell into that category, with Tweeters blasting out frustrations about not being able to stream the keynote. (Virtual coverage improved as the day progressed and the keynote replays are now posted as well, free registration required I recommend the guest keynote by Geoffrey Moore where he articulates IT’s mandatory transition from “systems of record” to “systems of engagement.” Blogger James Taylor issued a summary/analysis of Moore’s keynote).
SAP seemed to be under the impression that this was the biggest event in the history of business intelligence, and that was not the case. But to be fair, BI 4.0 is unquestionably the biggest BI release in the history of SAP, three development years in the making. Key features include:

Of course, the new 4.0 platform is also “optimized” for in-memory/HANA usage. Numerous mobility enhancements, the kind that make keynote speakers hyperactive onstage, were also included, such as Webi for the iPad and Dashboards (Xcelsius) for the BlackBerry Playbook tablet, a device that is happily free from the anti-Flash restrictions that currently prevent BusinessObjects Dashboards on the iPad (see my on-site interview with RIM which includes a PlayBook demo of SAP Dashboards). During his keynote, SAP’s Steve Lucas went so far as to say “In-memory with mobility is the killer app from SAP.” (One SAP Mentor I respect differs, arguing that the real impediment to mobile performance is not server speed but consistent broadband connectivity). One notable exception to the neato BI 4.0 stuff: the SDK will not be available until the 4.1 release, one of several reasons I’ve heard from customers for waiting out the 4.0 hype.

All of these improvements point to the success SAP has had cross-pollinating BusinessObjects technologies. BusinessObjects has avoided the “standalone” acquisition fate and become part of the DNA of SAP, with increased use of embedded analytics and BusinessObjects products spread across applications and platforms. This success, accomplished despite key BusinessObjects executive departures such as John Schwartz, might be the under-reported success story behind BI 4.0. From the get-go, BusinessObjects’ open Java development sensibilities and its engaging executive style has been a benefit to SAP’s own necessary culture changes. Jonathan Becher, a rising SAP executive who hails from BusinessObjects and publishes one of the most readable executive blogs inside or outside of SAP, is one such example.

But that kind of speculation doesn’t qualify as a reason to fly to New York City, so reporters end up judging SAP by the sexiness of the press releases. One that was met with a yawn was SAP’s expansion of its industry-tailored Business Analytics apps, with six more issued in time for this show. However, I talked with one customer, Jim Braun of EZCORP, who vouched for the value of these kinds of apps, including their “accelerator templates,” pre-built tools that saved his team at least six months in customization efforts. Here’s our video interview:

Speaking of buzzworthy, there was also a HANA customer at the event, Christian Ritter of Hilti. As you might expect, he was never at a loss for analysts to talk to during the event. It made sense to include a HANA customer in the BI 4.0 launch, given that HANA has implications for how SAP customers will be rolling out their BI strategy in the years to come. In the longer view, HANA is unquestionably disruptive to SAP Business Warehouse (or any other data warehouse in use by SAP customers).

We saw signs of this disruption during the conference. Ritter, for example, talked about the potential of HANA to eventually reduce or eliminate their need for BW. One example he cited was being able to roll out a regional initiative without having to build new InfoCubes or stress about data warehouse performance issues. Those are the kinds of problems you want to have, likely a couple years out for most SAP customers, but the ripples were certainly felt in New York City. (See my on-site video interview on HANA with Ritter).

I inadvertently caused a Twitter storm on this topic. We were in the middle of a terrific “deep dive” blogger session with SAP BI reps on February 22. During the session, SAP showed the bloggers a slide that recommended those SAP customers not running BW to “go directly to HANA” instead. I was surprised to see this slide, for two reasons: one, it seemed a little premature to recommend HANA definitively over BW. The slide also implied SAP had reached internal consensus on this recommendation. (see blogger Prasanth Rai’s summary of this important discussion).

When I tweeted my surprise about this slide, I got some strong reactions, including someone from SAP’s own IT group who had a different perspective. HANA is clearly disruptive not just outside of SAP, but internally. SAP has time to build internal consensus on HANA-versus-BW, but a “consensus roadmap” will eventually be needed, not only for customers, but for SAP itself.

With the HANA and BI 4.0 General Availability dates still in the future, there was a “wait and see” vibe with the BI 4.0 launch that didn’t set the best tone for the “new SAP,” which is supposed to be about getting products to customers NOW rather than working towards mega-releases that are continually delayed. However, I do see some good news for SAP – positive results I didn’t see mentioned in other blogs:
Meanwhile, SAP has a number of unresolved BI issues to conquer. Here’s a sampling:
– Master data management. “Fun with dashboarding” can obscure the vital (if unglamorous) scrubbing and validating of data, up to the master data level. SAP has a pressing need to standardize its MDM practices and apps across releases.
– Predictive analytics. Mining historical data has never been easier, but using that data to anticipate forward trends is not yet SAP’s strong suit. Blogger James Taylor, one of six bloggers at the New York show, is expert in this area and liked what he heard from SAP on this topic, albeit with SAP’s promise to have more substantial updates by year end 2011. In his recap, Taylor also points out SAP has work to do with business rules management, because SAP’s “rules engines (BRFplus and NetWeaver BRM) cannot access the Universes directly.”

– Unstructured information. As if companies didn’t have enough problems with unstructured information, the “social enterprise” faces serious new difficulties, with an onslaught of social media noise that contains hugely valuable nuggets (and sentiment patterns) – *if* they are placed in a process context and integrated with structural data. SAP is making progress on some aspects of this, via improved text analytics and social media integration sprinkled across products, but there is a long hike to go. According to BI expert Dave Rathbun, one of four SAP Mentors on the BI 4.0 blogger track, SAP is improving on its text analytics capabilities. Hopefully he’ll blog more on these details (see Dave’s conference entries). StreamWork, one of SAP’s key collaborative applications, may play a big role here, given its continuing progress on integration with collaboration platforms (see: OpenSocial announcement) , but I’m still in wait-and-see mode with StreamWork while usability is improved.

In conclusion
SAP is not out in front of all other BI vendors like they breathlessly try to convince us. Plenty of vendors are doing compelling things with BI, sometimes at cheaper prices. Where SAP picks up steam is around the convergence of BI, mobility, and in-memory. If SAP can complete this convergence while focusing less on hip technology and more on empowering business users to solve the problems transactional ERP could never handle, SAP could move beyond their ERP roots to become a true “biztech” leader, not in BI, but in their own category they are perhaps uniquely suited to invent.

(Disclosure: SAP covered my travel and accommodations to this event.)