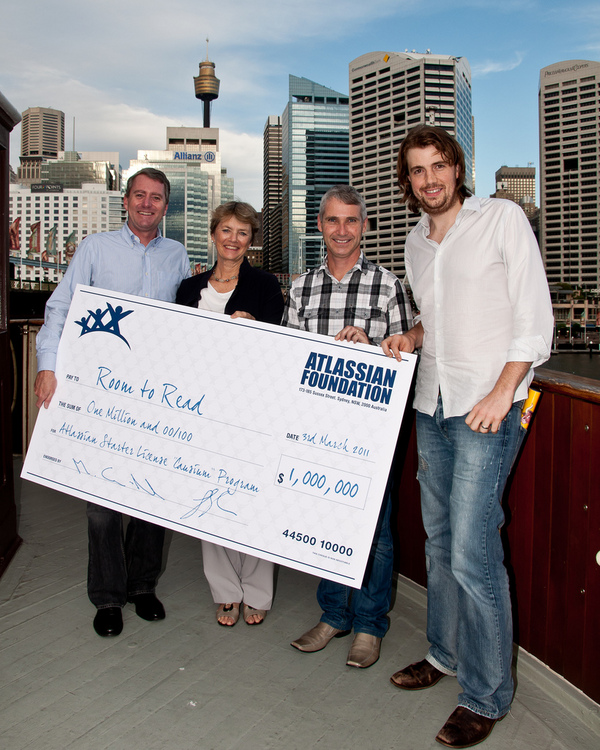 Two years ago I reported on Atlassian’s initiative to to raise funds for the benefit of Room to Read, an organization that builds schools, libraries in rural communities in Nepal, Cambodia, Vietnam, Bangladesh, Laos, Zambia …etc. Giving away $1,200 worth of software licences for $5 in a 5-day drive, they first planned to raise $25K, then increased the target to $100,000.

@Krishnan and I thought we should put our money where our mouth (pen? keyboard?) is, and both purchased a bunch of licences just to help push Atlassian towards the finish line.  The last minutes were dramatic:

A few month later Atlassian decided charity should not be ad-hoc campaigns but an ongoing commitment: they extended the Starter Licence program forever, doubling the price from $5 to $10 – still a steal – with all proceeds going to Room to Read.  Less then a year and a half later they’ve achieved a major milestone: One Million Dollars to charity. Co-Founder Mike Cannon-Brookes reports:

By the end of 2010, Atlassian impacted over 45,500 children across 4 different countries. Together with the local communities, we’ve built 4 complete schools, established 99 libraries, written & published 2 local language titles (including printing 10,000 copies each), and provided scholarships to 430 girls who would otherwise not have gone to school.

Update: This must be million-dollar-charity-day:-)  While I was typing this about, Salesfoce.com CEO Marc Benioff took the stage at CloudForce and announced a $1 Million donation to City College of New York.   Wow!