I spent a few days this week catching up with Webtrends during its annual user event, Engage, in San Francisco. Web analytics is covered in my IDC group under CRM analytics but as most of you know this isn’t something I spend a great deal of time researching, at least until recently. As I’ve spent more time on social business and specifically socialytics as a part of making social data actionable, I’ve realized that web data, while not “social” data per se, is behavioral data that can help build a true picture of customer behavior when combined with social data and enterprise customer data, especially transaction data. That’s how I first got interested in what Webtrends was doing, although I will say I’m very pleasantly surprised with several things I learned this week. First let’s look at this linkage to socialytics though. The following diagram shows the interconnected nature of the three data sources: 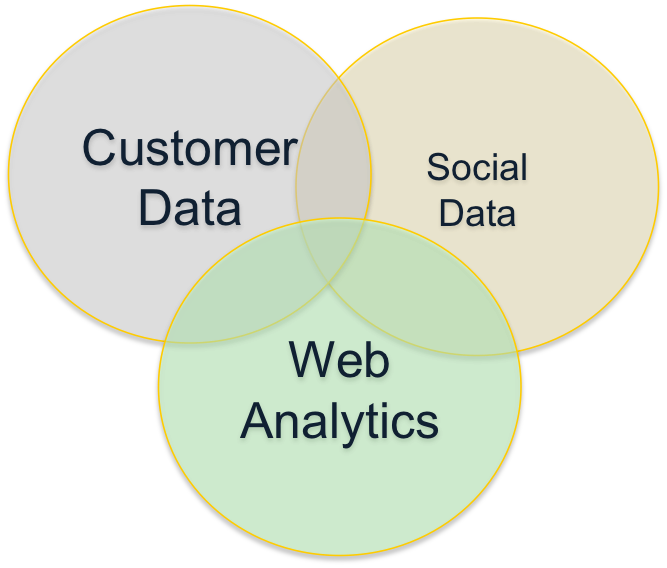 One of the most promising areas of socialytics comes as a result of using behavioral-cultural modeling techniques from sociology to analyze past behavior and to infer future action. Social data from public sources like facebook, Twitter, blogs, YouTube, etc. can be a rich source of information about individuals. Web analytics brings a second set of behavioral data to the mix and could help define a clearer picture of customer behavior.

Back to Webtrends and this weeks announcements though. Webtrends has a strong portfolio of products and services aimed at increasing marketing effectiveness. Here’s a chart that shows current offerings:

During Engage Webtrends announced the upcoming release of Analytics 10 with a completely revamped architecture, and user experience (UX). The release was designed around three concepts: 1. analytics across digital channels, 2. data beyond the tag (beyond site data) and 3. intelligent campaign discovery. To provide a broader view “beyond the tag”, Analytics 10 now includes the ability to analyze data from web sites, mobile apps and social sites like facebook. The new UX incorporates a new concept called spaces for tracking multiple channels which adds to the other two existing views, channels and groups. Here’s a screen shot of the spaces UI: 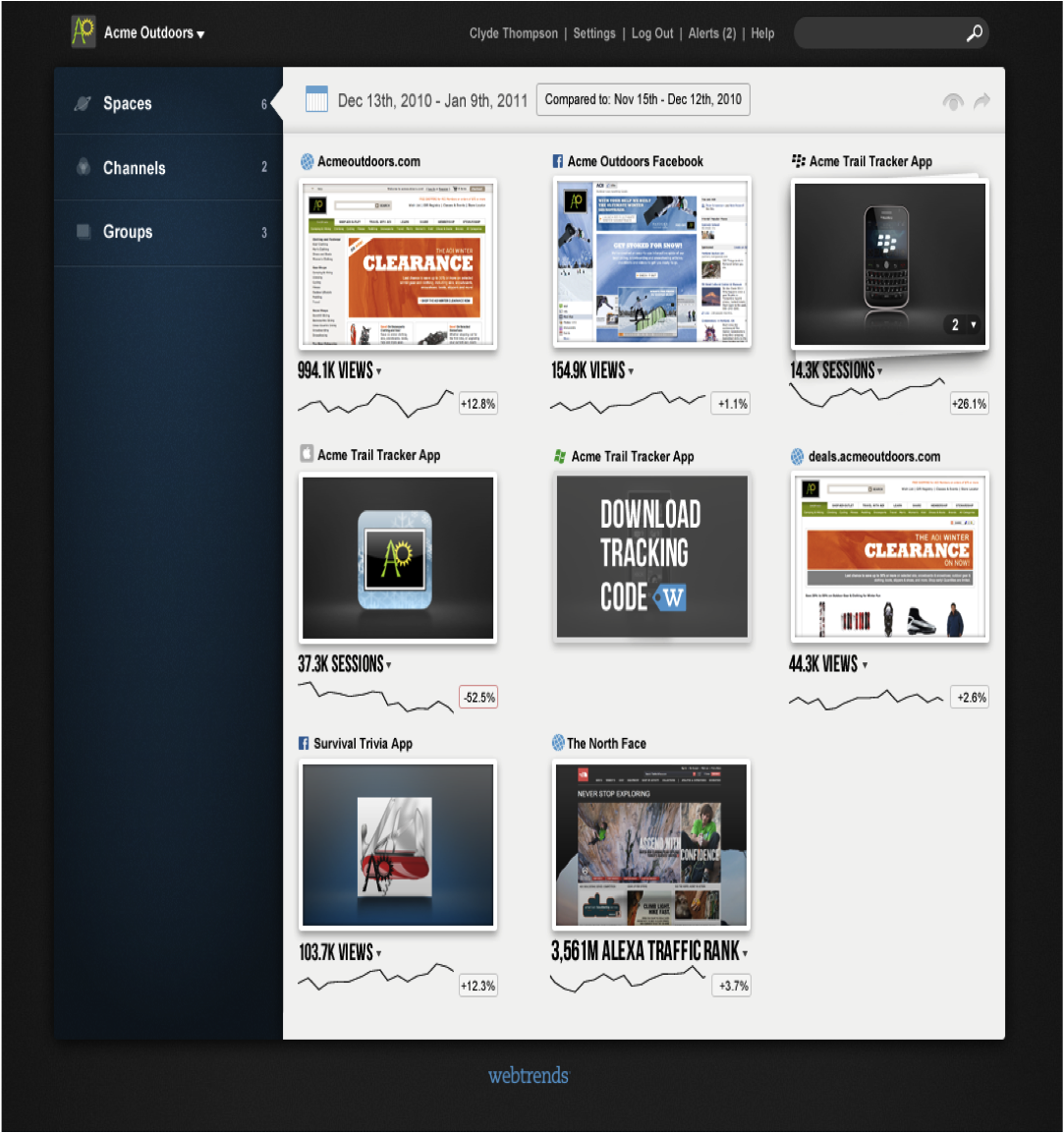 With this release Webtrends also moves to more of a marketing dashboard for cross campaign management, providing visibility to metrics across channels. In effect Analytics 10 could be a portfolio management tool for managing campaigns like a project portfolio management tool, something I believe CMO’s and other marketing executives sorely need in today’s rapidly changing marketing environment. With the emergence of social marketing making campaign decisions has to change from quarterly or monthly to a much shorter window and cross channel analytics will play a large role in this process. Establishing return on scarce marketing dollars is even more critical in a highly competitive and cash constrained business environment.

The new architecture positions Analytics 10 as a broader, cloud-based analytics platform with a lot of future expansion capability. Webtrends, which develops in the agile development model, plans 3 feature rich releases per year. As a part of this release Webtrends also revealed its new UI, which I have to say is very impressive. I’ve written often about how poor the UX is for many enterprise SW products. With this release Analytics 10 joins my short list of truly modern UX’s. Take a look at this screen shot: 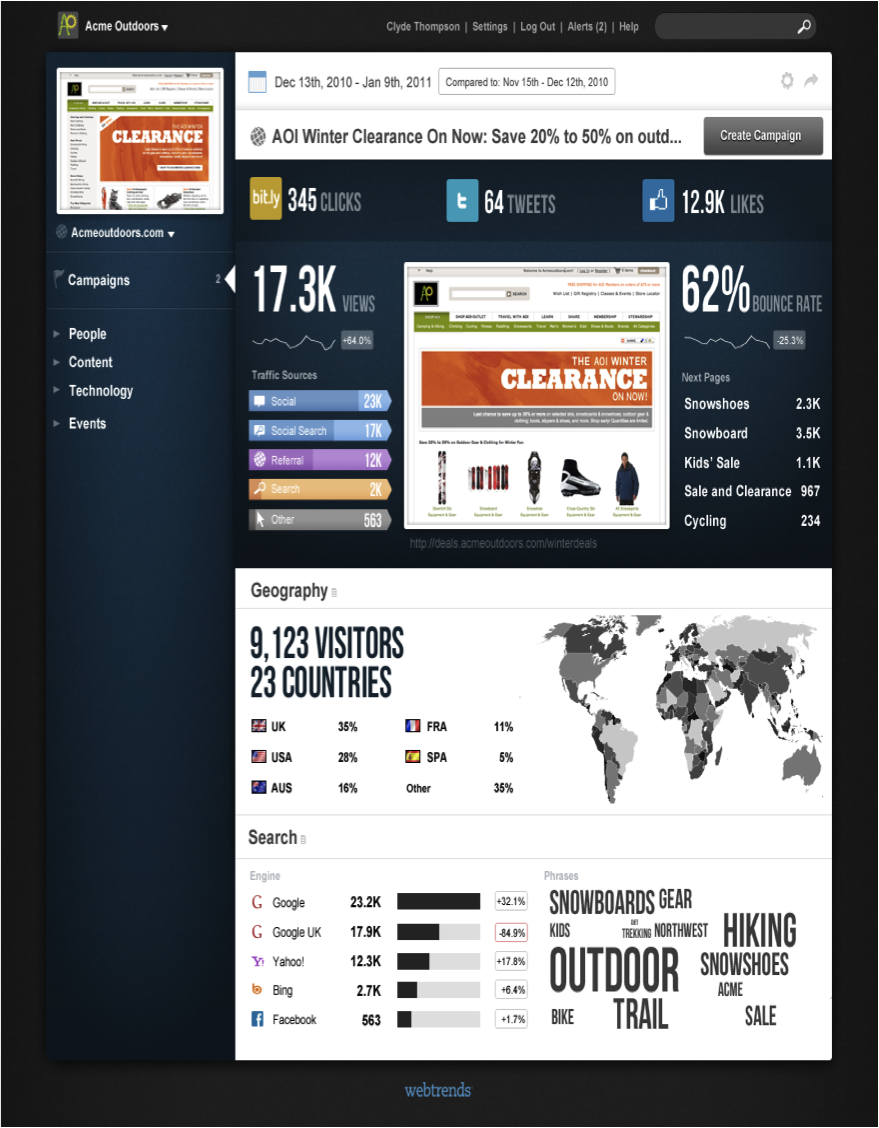 Engage was a good showing for Webtrends and from what I could tell the word embodies the attitudes of the customers I met.