“The one thing we’ve heard [from businesses] is that people need a commercial entity to back an open source project,” Collier says. “Free and open source is great and all, but they want someone they call when they run into problems. Rackspace is the natural company to do that.”

For an introduction to OpenStack, see this RedMonk interview with Rackspace’s Jonathan Bryce (there’s a full transcript if you prefer):

As part of this new business, Rackspace will be generating a lot of material around best practices, architectures, and other “documentation” and practices for running various types of clouds. I asked if that would be “open,” to which the answer was more or less “yes,” or at the very least, “that’s a good idea.”

RedMonk fields a lot of inquires around cloud best practices and experiences, so there’s obviously a hunger for it. Keeping this material “open” versus close-to-the chest (as big consulting outfits would do) would be very beneficial to Rackspace: the more OpenStack-based clouds there are out there, the wider the pie for their support offering. Additionally, being the “owner” and (potentially) “biggest user” of OpenStack would have plenty of benefits to Rackspace even if they didn’t monetize support. 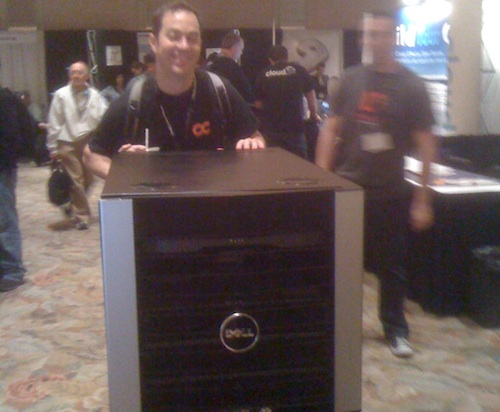 Building a hyperscale cloud requires a different mindset (we like to call it “revolutionary”) compared to a traditional enterprise virtualized infrastructure. This means driving a degree of simplicity, homogeneity, and density that is beyond most enterprise systems.

The core lesson of these large systems is that redundancy moves from the hardware into the software and applications. In fact, the expectation of failure is built into the system as a key assumption because daily failures are a fact of life when you have thousands of servers.

The Dell, Opscode, and Rackspace offering is the launch of a beta program for OpenStack clouds, based, of course, on Dell hardware (they’re actively seeking people to do PoC’s). As Dell sums it up: it’s an “OpenStack installer that allows bare metal deployment of OpenStack clouds in a few hours (vs. a manual installation period of several days).” In addition to using, of course, OpenStack, Dell is looking to use Chef for not only the on-going automation (“configuration management,” if you prefer) and initial setup. Their nicely detailed paper on the topic sums it up: