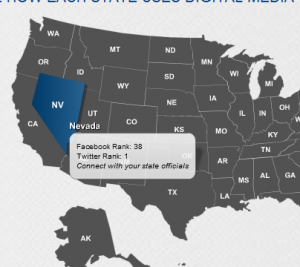 Take a look at this from the Las Vegas Sun: Nevada tops all states in Twitter participation.

Earlier this month DCI, a public relations group published a report saying, among other things, that Nevada is the state with the most Twitterers by percentage meaning that a whopping 1.74 percent or nearly 47,000 of the state’s 2.7 million+ residents Tweet.

Apply that high portion to the U.S. population and you get 5.74 million people.  Can that be right?  Facebook has about 500 million users globally and out of a world population of about 6.9 billion people that’s 7.25 percent but the number nearly doubles if you consider only three billion people as likely to have access to the Internet on a regular basis.

So, while the numbers are huge, the percentage of users of social media is rather small, but obviously headed in a good direction.

Metcalf’s Law says that the value of a network is proportional to the square of the number of nodes or participants using it.  So by that measure even at small percentages we’re looking at high value, and considering social media’s growth rate the percentages ought to climb rather fast.  Nonetheless, 1.74 percent is a sobering reminder of how far we still have to travel and more importantly, they show the value of conquering a small segment of relatively young and smart segment.