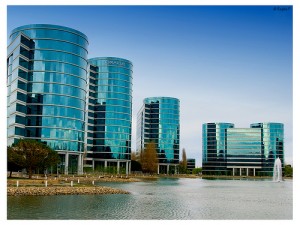 Note: I wrote this while sitting in the Hotel AC Finca in the Madrid very wealthy suburb of Pozuelo de Alarcon post-BPT Social CRM Summit. I felt compelled by a tired body and racing mind to post some tapas sized thoughts about Oracle, which aren’t. They are things that have germinated then marinated for the past two or three months at least and I hope will light a fire under a company that’s gone missing in the last 12 months or more when it comes to public visibility in CRM. A company that needs to be public for the benefit of the industry and for the benefit of its customers.

About 3 years ago, Oracle launched both a Social CRM product and then a Social CRM thought leadership initiative. That year we saw Oracle announce, though not release Sales Prospector On Demand, Sales Library On Demand and Sales Campaign on Demand – all part of the Social CRM suite. Anthony Lye, one of the brightest minds in the CRM/SCRM industry, was out their providing some seriously excellent thought leadership, especially given that he represented a vendor. Not an easy thing to do.

But about 18 months ago, they went strangely radio silent. No discussion of Social CRM. No product push. So recently, I went looking to see what I could find and this is what I did find. When you click on this URL for Social CRM its broken.

Okay. So, I figured that maybe they just moved it to somewhere. I went to their CRM solutions page where all their related CRM products were listed.. Here’s what I found:

Okay. So then I figured I would do a search for the products and find them via Oracle’s search capability. Maybe they were just buried somewhere. Not to be apparently.

When I searched for Sales Library I got a “Content Not Available” message. Weirdly, when I looked for Sales Prospector, I got the Oracle Label Security Administrator’s Guide. I didn’t bother with Sales Campaign on Demand.

That unto itself is no huge deal. They probably decided the products wouldn’t work and as I’ve stated before I thought that Sales Prospector was a high risk product and that all these products weren’t truly Social CRM but sales effectiveness and an Enterprise 2.0 sort of collaborative sales. Plus Fusion CRM integrates some of the collaborative capabilities that were touted in Oracle Social CRM and is far more robust and ready than Social CRM was.

In the meantime, the radio silence continues on both Social CRM and even to a large extent, good ol’ traditional CRM. I haven’t heard squat from them with the exception of an occasional press release and a call or two – that would be over the last several months. I’m also apparently not the only one. I’ve heard the same concerns from analysts, journalists and influencers of all stripes and hues.

That concerns me. Not that they haven’t talked to me. They don’t need me to be successful in any way. They don’t really need analysts, thought leaders or press to be successful,either. This is a company that knows how to sell products very well and is driven by sales more than anything else. They have nothing to prove and owe no one.

But having them push SCRM and even CRM to the public back burner is sad to me. Oracle has one of the best CRM teams I’ve ever run across when it comes to skills, innovative thinking, and just good people. They have a guy who has early on, been seen as what is now an emerging category of thought leader – one who works for a vendor (for other examples see Michael Wu, Chief Scientist at Lithium, and recently on the scene, Umberto Miletti at InsideView). They have, from the analyst and bloggers perspective, one of the best liked folks in the industry, Susie Penner, running their bloggers program and she is one who is trusted universally. They have the money for sure. They have Fusion CRM and Oracle CRM on Demand. They have the intellectual quality potentially and the resources to back it up. They have the numbers – 45+ thousand annually at Oracle OpenWorld.

But as far as I can see, for reasons I can’t fathom, they are doing nothing. Nothing. Nada. Nunca. Which is not only sad to me, but damaging to them and while it won’t stop them, it doesn’t help to say the least. Their competitors are making progress everywhere.

So that you don’t think I’m getting all mushy, let me remind you of something I’ve said before. I couldn’t care less who wins the CRM competitive wars. But I do care that the industry succeeds and that each company in it succeeds – unless for some reason I don’t like the company. I think Oracle has been a big contributor to CRM even when its product sucked, pre-2007. They were the first company to embrace a CRM product that was aimed at the sales person rather than a sales manager. They were the first company to embrace Social CRM as a concept, though their products weren’t truly that – they were sales effectiveness products. They were among the first vendors to provide some thought leadership in SCRM that actually resonated beyond their product.

So its nots a good thing to see them clam up for more than a year. I hope they call me out on this one. At least I’ll hear something