Marc Benioff: the consumer tech salesperson to the enterprise 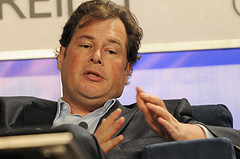 Commenting on the acquisition of Radian6, Dennis Howlett says “Salesforce is becoming a company that I don’t understand”. To be honest, many enterprise observers, yours truly included, have been confounded by the company many a time.

When Marc Benioff started the company over a decade ago, he could (should?) have followed the path he learned at Oracle. Write code and let Accenture implement it, let EDS host it, let Infosys application manage it.

Instead he chose a widely different path. Where did he get the inspiration? Not from enterprise vendors like IBM or SAP, but from the consumer tech world. As he wrote in the foreword to my book:

“Innovative companies such as Amazon.com, eBay, and Yahoo! changed
everything for consumers and changed the business landscape as well.
Inspired by the consumer Web, we developed a better way to serve
enterprise customers. We knew we could deliver business applications
cheaply through a Web site that was easy to use. The skeptics didn’ t think
much of it (history always repeats; there’s always persecution with some
new ideas), but in just a few years we were able to transform the enterprise
software industry. The old model of how people bought and built software
was disrupted and the packaged services that companies used to buy separately from software vendors, systems integrators, hosting providers, and offshore application management firms were compounded into a single
contract and service agreement.”

Five years ago the company was at an inflexion point – like typical enterprise application vendors it could have moved into financials or manufacturing functionality. Instead, it chose to let its ecosystem take it in new directions. FinancialForce.com in accounting and customers like recycled countertop maker Vetrazzo built a custom ERP suite using its tools. Again, as we have seen with Apple and others, no single entity can dream up use cases an ecosystem can. This is so foreign to the typical enterprise vendor which would rather toil for years and force march its customer base to its unimaginative release 8.6.1.7b.

So, he has found a nice niche.

One response to “Marc Benioff: the consumer tech salesperson to the enterprise”