The IT failures greed / blame cycle

Greed and blame play a profoundly important, and deeply negative, role on IT projects.

Some project participants and stakeholders sacrifice ethical behavior to gain a larger “slice of the pie.” Taking credit for others’ work or ideas is one form of greed. Another expression of greed occurs when system integrators supply unqualified resources to customers. Software vendors that tolerate predatory behavior from system integrators and resellers are equally guilty of greedy behavior.

Blame reflects the desire to deflect negative attention, whether deserved or not, away from oneself. Political backstabbing, passing the buck, and other forms of non-accountability usually reflect fear of negative consequence. The opposite, or positive aspect, is the confidence to stand up and do what’s right.

In essence, then, greed consists of the desire to attract benefit at any cost, while blame seeks to push negative consequence onto others. The cycle of greed and blame is illustrated below: 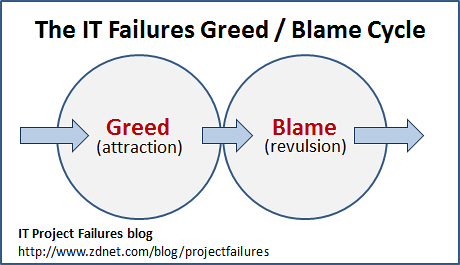 CIO perspective: Greed and blame are inescapable parts of large budget initiatives, which is one reason so many projects are screwed up.

However, learning to recognize the subtle manifestations of these behaviors can help any CIO manage more effectively. Although we cannot easily fight against deep-seated human emotions such as greed and blame, successful CIOs learn to discern and understand project stakeholders’ motivations.

Using that knowledge, the best CIOs skillfully direct stakeholders’ personal goals and ambitions into positive channels that support the organization and project.