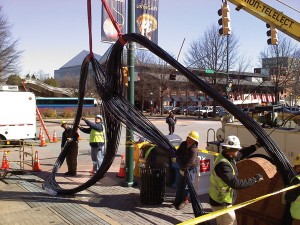 Ok, so the title may sound strange as we brace for another round of telecom consolidation via ATT-T-Mobile.

But as I recently reviewed family and business telecom expenses for tax filings, I was impressed that AT&T and Verizon are on pace to be less than 20% of our telecom spend after being the dominant vendors for a long, long time.  Sprint, Vonage, GoGo, Skype, Google Voice, Brighthouse (our local cable), MaxRoam (overseas roaming), Tel3 (calling card) were the major vendors last year.

I walked into a Clear (the mobile 4G service) store recently and the sales person was telling me that in some cities like Atlanta where they have been offering service longer, a number of households/businesses are cutting off their fixed broadband service. May someday soon it may allow us to reduce our dependence on Verizon FiOS broadband – and may be even Sprint mobile calling.

I talked to Geoff Daily who said he moved to Lafayette, LA to start FiberCorps. He was attracted among other things by the high-speed and relatively low-cost broadband offered by the  Lafayette Utilities System – and the promise of building a community around that network. In my book I had a blurb on them

“After five years of bruising court battles with AT & T and Cox (the local cable company), which went all the way to the Louisiana Supreme Court, the community can now take advantage of broadband download speeds approaching 50 mbps per second for $58 a month”

Geoff was telling me about Chattanooga, TN and its community owned utility and its rollout of 1 Gigabit network. That is said to have helped in amazon’s recent decision to locate nearby a 2,000 employee distribution center.

Let’s not get carried away. Lafayette and Chattanooga are aberrations in a world where politicians and lobbyists push for consolidation.  My family is an exception in a world where telcos/cable companies are offering consumers bundles of many services.

It’s up to us as consumers and citizens to demand – and importantly take advantage of – choices rather than just blindly renew contracts or continue to get locked into long term contracts with the measly hardware/device subsidies telcos continue to seduce us with.

Choice – the word has a nice ring to it. But we all have to earn it.