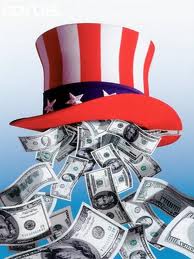 For anyone following government spending or manufacturing trends, there’s a fascinating piece in the Wall Street Journal from last week. Authored by Stephen Moore, the piece suggests a radical inversion in jobs growth and creation in the US economy. To wit, “Today in America there are nearly twice as many people working for the government (22.5 million) than in all of manufacturing (11.5 million).” Compare this with 1960, “when there were 15 million workers in manufacturing and 8.7 million collecting a paycheck from the government.” Going beyond manufacturing, Moore suggests that today, there are more people in the US working for Federal, state and local government than construction, farming, fishing, forestry, manufacturing, mining and utilities combined.

In an upcoming issue of Surplus Record, Lisa Reisman and I penned a column that does some further digging and fact finding in this area. What we discovered supports Moore’s thesis that, as we describe it, manufacturing is “now a fly on the back of government.” Consider that in 2010, the Federal government alone spent nearly $3.5 trillion, a number substantially higher than the entire output of US manufacturers. In fact, in the same year, Federal spending on only US entitlement programs (e.g., Medicaid, Medicare, Social Security) totaled the approximate sum of US manufacturing output.

Ironically, the United States is still the world’s largest manufacturer — although based on China’s growth, this will not last for long. In fact, CNN suggests “the value of goods produced by China’s factories reached about $1.6 trillion last year, compared to $1.7 trillion by U.S. manufacturers.” By 2011, China is expected to have greater manufacturing output than the US. Despite these numbers, “US companies have a right to complain about unfair trade practices and currency manipulation from China and other countries. But the elephant in the room when it comes to the slow and steady decline of the American dream is not red.

“Rather,” we continue, “it’s the massive juggernaut we’ve created in the form of government employment and government spending … It is most certainly a shame that the productivity gains that we’ve realized in manufacturing in recent decades have translated into fewer jobs in that sector and, moreover, the efficiencies can’t be duplicated in government.” On a different — but related — note, as a CPO pointed out to me at a BravoSolution event this week (where I gave a talk on commodity management), given our government’s continued spending appetite and the introduction of QE2 (quantitative easing), how can anyone be surprised when dollar-denominated commodities keep climbing through the roof? Who needs great upticks in demand to drive price escalation when you have the printing presses running a third shift?