During his keynote at this week’s Convergence customer showcase, Microsoft Dynamics chief Kirill Tatarinov demoed the use of Microsoft’s Kinect interactive gaming system as an interface to the company’s AX ERP system. It was a relatively lackluster demo as far as Kinect goes – no wild gyrations, or dislocating motions, no funky music or funky moves. Not exactly hyperkinetic on the AX side either. But by the time the quick demo was over, Microsoft had set another stake in the ground as both an innovator and a company that can create synergies out of its historically disparate business units. And the cause of gamifying the enterprise was furthered once more. 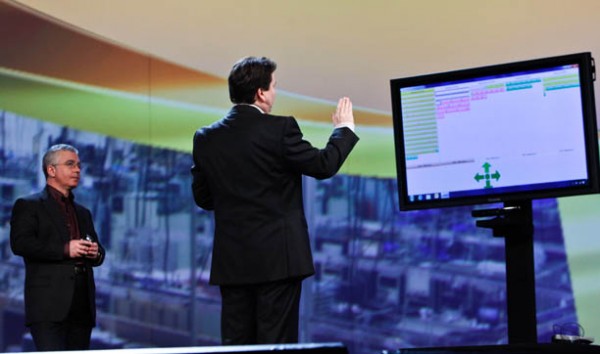 The demo was a simple simulation of a shop-floor environment where a gloved worker uses hand gestures to manipulate a kanban system by pulling down menus and exposing underlying data in the kanban system. I would have made the demo a little more exciting – I honestly imagine real workers would be tempted to liven up their Kinect sessions with a little more pizzazz than we saw on stage – but the outright functionality of the Kinect-driven user experience was undeniably cool.

Does this mean that Dynamics ERP is becoming a game? Not really – the use of Kinect absent any specific game mechanics means that no real games were created in the process of making the demo. But two observations on the ensuing gamification of the shop floor: the first is that, assuming that the enormous uptake of Kinect since its inception will continue apace, it will be hard for anyone to look at this user experience and not see the gaming components that Kinect could potentially bring on board.  “Hey kids, mom uses a Kinect at work too” will actually add some unavoidable gaming cachet to the boring, old-school shop floor we have come to know and (wrongfully) vilify.

The temptation – make that the imperative – to gamify the shop floor won’t be far behind. That’s the second effect: Kinect’s presence on the shop floor will make it virtually essential that some game mechanics be added to Dynamics ERP. It was hard (at least for me) to look at the brief demo and not imagine  a little leader board pop-up that showed who was the best at making a manufacturing line lean, among myriad possibilities. That and a monthly dance contest on based on the Kinect Dance Connect game, which could do wonders for employee morale too. The ability to both improve shop floor interactions and employee engagement sounds like a win/win to me.

The interfaces for this new Kinect capability are coming out shortly, and my sense is that any customer that is looking at touch screen interfaces to their ERP or MES systems should welcome the touchless touchscreen that Kinect provides. The bonus of being set up to start the gamificaiton of the manufacturing shop floor should be tempting to any forward thinking company as well.

The fact that this breakthrough is coming to ERP via Microsoft’s gaming division is the kicker. Kirill’s number one goal when he took over four years ago was to up the value and visibility of Dynamics in the greater Microsoft. For the last few years the sell-through synergy between Dynamics and the rest of the Microsoft stack has been a vastly unheralded story. The fact that the Xbox division is working hand-in-glove (pun intended) with Dynamics is further testimony to the success of Kirill’s internal synergy strategy.

How far into gamifying Dynamics will Microsoft go? My guess is we’ll see more in the near term. Microsoft’s Bing group gets gamiificaiton as well, and was one of the key presenters at last fall’s Gamification conference. As the concept of gamifying the enterprise gains momentum, I expect to see Microsoft Dynamics, with the rest of Microsoft at its back, take a leadership position.