Steve Miranda, SVP used those words in his keynote yesterday as Oracle rolled out its more evolved cloud messaging at its Collaborate User conference in Orlando. I expect Oracle marketing to emphasize the choice theme a lot more rather than its hostile “cloud is fashion du jour” or confusing “cloud in a box” messages of old. The emphasis was on Oracle’s role as backbone of many public clouds, its role in many virtualized private clouds and its growing list of hosting and other cloud services (he presented along with Joanne Olsen who Oracle recruited from IBM’s Service group last year). 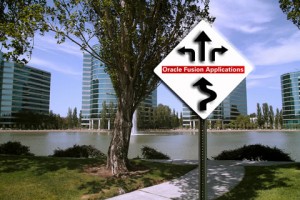 He emphasized choice in other ways as he discussed Fusion apps – more choice in portfolio of ERP apps versus competitive narrow, CRM, HR and other SaaS category offerings. He talked about choices in co-existence scenarios with current PeopleSoft, JD Edwards, Siebel and Oracle EBS products. He threw out names of a choice of SIs which were working with around 50 early adopter Fusion implementations – Price Waterhouse, IBM, Accenture, Deloitte.

Later when I met with Steve I asked him if the SIs were influencing the choices – given they were “traditional” firms, were they nudging customers towards private cloud implementations? He said he did not see it – they were being smart in going along with customer desire/direction. I asked if different economics in various cloud versions were influencing direction. He said he did not see much – yet.

Oh, I think it will as companies like Facebook (and Google and amazon and Microsoft and Yahoo!) show off data centers with massive scale and commoditized servers and storage stripped of “vanity” covers and with amazingly efficient PUE and Oracle customers ask for such comparables. It will as customers compare against SaaS application management labor efficiencies in their multi-tenant settings. It will as customers learn more about next-gen cloud integrators like appirio which run circles around the implementation efforts of traditional SIs.

So, back to choices. The question is will Oracle allow customers such choices? Today, Oracle’s cloud is full of premium components – its expectations of software pricing, its expectations of Sun branded gear and that pricing, its SI partner choices and their pricing. It may find itself in a similar situation as SAP which has had a hard time scaling its own SaaS solutions because it is addicted to own version of premium products and partners.

I must admit it was good to see Steve play a video of Principal, the financial services company, one of  the early Fusion adopters (along with units of Alcoa and Eaton in various business processes and world regions) and then gleefully repeat what one of the customers says in the video: “Fusion is real!”.  It was an assurance to customers who may have been spooked by his boss, Larry Ellison at the last Oracle OpenWorld when he talked about only adopting Fusion if you are “brave”.

About time – in 2006, Oracle announced it was half way there with Fusion applications. We may finally be 85% there. Good to have that choice.