“We believe the current [platform clouds, such as Azure and App Engine] are incomplete,” [VMware senior director of cloud and application services Jerry] Chen says. “There is no one platform that is multi-cloud – private and public – and no one cloud is architected, out of the gate, to be extensible to many different frameworks and many different languages.”

The Cloud Foundry offering from VMWare is looking like one of those obvious, good things I rarely expect Big Companies to do. Of course you’d want a portable PaaS layer that ran Java, Ruby, JavaScript, and other languages. Of course you’d want the company to actually run their own cloud instead of having to sort through “partners.”

In summary, they’ve put together a “bring your own PaaS” with wide language support and a VMWare run instance you can use as well, if you don’t want to bring anything and just go directly to a cloud that has it all wired-up.

The most critical thing for VMWare to do is to let this “open is best” philosophy play out in their application development strategy. VMWare’s current fortunes were built on distinctly not that philosophy and it’d be easy for the kernel genisus who must hold much of the corporate power to derail the appdev strategy, which is a much different beast than virtualization and other business models closer to the metal than the glass. 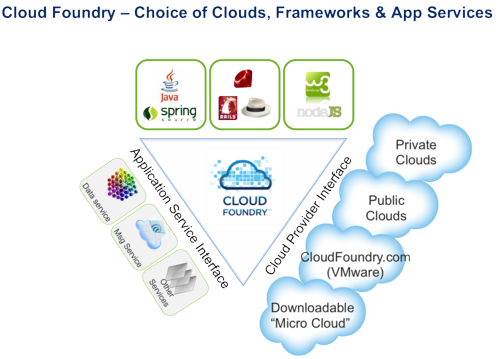 Nancy Gohring of IDG sent over a few questions on the topic, so why not inline the answers here? (I’ve summarized the questions, so they’re not directly Nancy’s):

How does this fit into the context of existing cloud and PaaS offerings? It’s difficult to know completely since the offering is still in beta and the pricing isn’t available. That just covers the “.com” part of CloudFoundry though. I would think that developers would be more keen to use a packaging put together by the Spring folks, Java developers at least. When it comes to PHP, Ruby, JavaScript, and other future platforms there’s a lot of street cred VMWare has to earn. But with this offering, it’s looking technically possible – it all comes to down to community and developer marketing.

As a counter example, Microsoft has to work very hard to convince developers that it’s not some kind of “evil empire” when it comes to locking in developers to Azure. Somehow Amazon (which is pretty “open,” actually), Google, and Apple get free passes on this: the perception that a ready user base and that there’s money on the table for the clever app developer in Apple-land gets developers to put up with the otherwise heinous “developer relations” Apple does.

Will this help move developers to adopt PaaS? They’re doing the right things to position themselves well: not just being Java, hosting on GitHub (an obvious thing I wouldn’t expect any BigCo to be “smart” enough to do), and providing the PaaS layer as open source for developers to run where-ever they like. Other PaaS vendors typically choose a point of lock-in to monetize every install on, where-as what VMWare appears to be doing is trying to create a giant pie of which they only monetize a several hefty slices. I hope that’s what they’re doing at least: the bad thing would be for their business folks to worry about monetizing every single Cloud Foundry instance. Coming from a shop that makes its money selling licensed software and that seems to be fast trying to be the new Microsoft, you always have to understand where VMWare is going to take it’s cut and see if that fits with your architectural plans. So far, CloudFoundry looks OK on that front, though.

What’s the “big picture”? So far, most people have been pleased with this. (Although @williamlouth claims to need facial reconstruction after looking at the code.) I haven’t checked out the code or anything [over the next few weeks, expect lots of snarky commentary from those who do], but the open nature of this and the wide-range of languages they’re targeting is looking good. If VMWare can make Java just one of the many technologies that run on their clouds and if they can allow anyone to use their cloud software without having to give a dime to VMWare or use their tools (see “The VisualStudio Test”), they should have a good chance at building a big cloud ecosystem that they can siphon cash off from. It’s a long play, but this is a good time to be putting all the pieces into place: all of their competitors are for sure.

Here’s what I’d expect from the competitors: