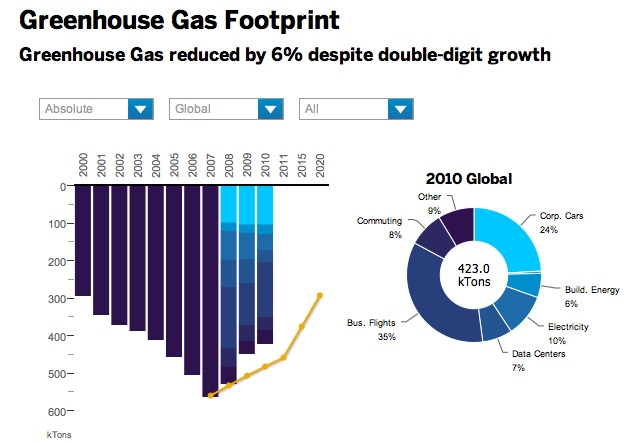 The graph above is taken from the Greenhouse Gas Footprint page of SAP’s Sustainability Report and it shows SAP’s global GHG footprint for 2010. Of particular note in this graph is that globally SAP’s 2010 carbon footprint for corporate cars is 24%. This is up from 23% in 2009 and 18% in 2008. This is obviously a problem for SAP who have publicly committed to reducing their Greenhouse Gas Emissions 51% (from their 2007 baseline) by 2020.

In an effort to help address this SAP decided to embark on a small scale Electric Vehicle (EV) project called Future Fleet. Future Fleet uses a fleet of 30 EV’s charged solely from renewable sources supplied (along with the charging infrastructure) by project partner MVV Energie.

SAP are using this project to test employee attitudes to EV’s but also to test their own EV eMobility charging and fleet management software which is being developed, and tested in tandem with the project. The software allows employees to log in and book cars for specific journeys between SAP sites in Germany, or for a day or a week at a time. The software also intelligently prioritises charging of cars based on expected upcoming journey duration, current battery state and other factors.

All good and laudable stuff. However, one major issue I have with the project is that for purely political reasons SAP chose an electric car for the project which seemed to be designed with the distinct purpose of turning drivers off EV’s…