The Interest Graph, People are Complicated

For several years now we have become comfortable with the computer science notion that a graph maps our people connections. The concept of social graph has moved from arcane geek speek to that of mainstream concept, thanks largely to Facebook but certainly not exclusively because of Facebook.

In the U.S. alone more people have social network profiles than don’t and this entry point to building one’s own as well as being a member of the social graphs of others has popularized the notion while revealing the incredible opportunity that exists for companies to explore and exploit the relationships people maintain. It’s a way to discover and extend our own knowledge and sense of connectedness.

The interest graph is not all that different from the social graph, instead of mapping our connections to people the interest graph maps our relationship, and ideally the intensity of, to the things we identify through our online behaviors as having an interest in.

What we are all learning is that at any given point in time we exist on the Internet at the intersection of content, social behaviors, and social networks. This is in itself a pretty big shift from what the Internet was originally conceived to do but is also true to the vision that technology can connect people and things.

Social graphs have many dimensions and the fact that social networks have enabled these graphs in a flattened state reveals the single largest shortcoming that impedes innovation on the social graph. People are complicated, we exist in many social planes whether it be personal friends, professional relationships, schools, family, activities, location… the list goes on.

The concept of interest graph is not new, companies like Pandora and Last.fm are based on the concept, Amazon brilliantly unleashed this on shoppers, and more recent companies like Quora are very much tied to the notion of content and people discovery based on expressed and inferred interests. What is different right now is the sense of readiness that brand companies are exhibiting; there is a clear appreciation for the untapped potential that social and interest graphs contain and a willingness to innovate.

If you are a brand company why should you care about a person’s interest graph? Most immediately it provides you with a window into the things that an individual person cares about, which then leads to the opportunity to target promotion and advertising in an intelligent way that not only improves the response rate for promotions but also reinforces the connectedness of people to brands.

If the interest graph begins and ends with better advertising and promotion, it will be a massive disappointment. The potential to drive brand advocacy as a result of interests and affiliations with other brands is so large that it borders on the incalculable. People associate, by choice, themselves with many brands in their day to day lives, and not surprisingly there is a strong overlap of constituencies based on the personality of the brand in question.

It’s too easy to say Ford, NASCAR, Budweiser and Walmart… but it is an effective illustration. Perhaps more subtle is the relationship that a company like Apple has to other brands, Nike being a good example. From a demographic standpoint there is a clear connection but also at a product level with Nike embracing Apple’s iPod technology. The point is that brands don’t exist in isolation, they exist in our consciousness in relation to other brands that we identify with.

The interest graph unlocks these relationships in a machine format and enables not just promotion but also content discovery that reinforces those relationships. The ability to introduce new products by targeting not just a company’s most passionate followers but also those of brands that are strongly associated with a company is a disruptive capability.

Lastly, the ability to mine the collective interest graphs for a company’s followers – those people who have opted into a brand – reveals a deep level of insight into the hierarchy of needs that the collective ascribes to. Starbucks did some fascinating work with Research.ly that brought this to life.

The interest graph is defined by connections, but it is brought to life through self-expression. When we combine brand-centric relationships and conversations, the interest graph eventually evolves into what is essentially a brand graph. Within each brand-related graph is a group of highly connected individuals that serve as a company’s network of influence. The ReSearch.ly team extracted 50,000 of the most recent Tweets that included a mention of Starbucks. We then analyzed the connections between people and identified the top 100 individuals and the number of their followers who also mention Starbucks within the 50,000 mentions. We can then bring to light Starbucks influencers as a representation of its brand graph and influential hubs. As we can see, the difference between monitoring and gathering intelligence allows Starbucks to now identify relevant networks and introduce personalized campaigns to further spur advocacy and loyalty. 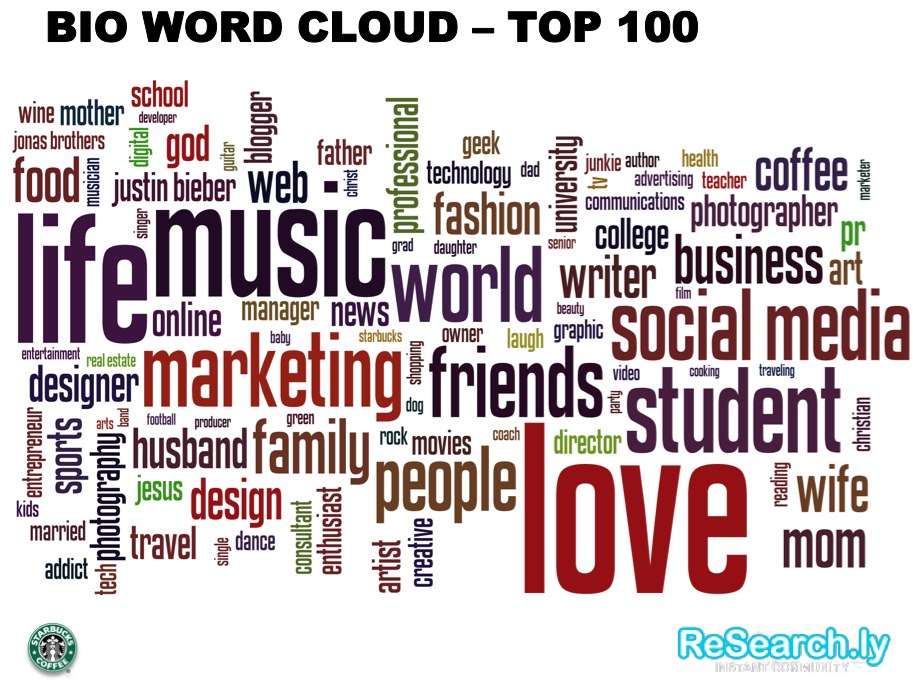