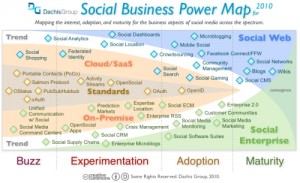 Careful with that spelling (for some reason I preferred it to Canute or Kanute).  Here is my premise.  I think, like Clay Shirky, that we are living in a period of transformation rivalling the changes in society triggered by the printing press, the telegraph, the telephone, photography, film, television, or the start of the Internet (web 1.0).  The application of social media inside and outside of business is changing everything.  However, since around 2009 some of us on the leading edge of this curve, who up to this point have talked about enterprise 2.0 or web 2.0 applied to business, have been drifting towards using the term Social Business to describe it.  Language is important.  For me that language is wrong.  If I ask the average woman or man in the street what a social business is they would tell me about organisations with a social conscience, philanthropic goals and ethical conduct – micro-blogging, collaboration and social media monitoring wouldn’t enter their heads.

Back on August 26 2009 Dennis Howlett wrote a post on ZDnet that triggered a fair amount of controversy  – “Enterprise 2.0: what a crock“.  His premise was that the world isn’t made up of purely knowledge driven industries that can be helped by social media tools, although he highlighted some very sensible examples of community adding value in business:

“Ford was one of the first to create an internal business community capable of delivering value back to customers. The result was the Ford Focus (in the UK/EU) where the design was initiated from the US, the drive train and the engine came from other manufacturers. It was a model that Honda – as both designers and supply side builders followed.”

The rest of his message was more a critique of a certain subset of the enterprise 2.0 mavens and consultants who sound a bit like a religious cult and believe the only way forward is to subvert and upend the corporate hierarchies.  He wondered where the use cases were and what problem enterprise 2.0 was actually trying to solve.  On September 2nd 2009 Andrew McAfee, the Harvard Professor who was really the first to define and popularise the E2.0 term, defended the concept with a string of use cases and agreed that the enthusiasts who talk in language of revolution and overthrow of the corporate hierarchy are both wrong and counterproductive.  Later in the month Stowe Boyd weighed in on the Enterprise 2.0 blog with “Social Business: Why The ‘Enterprise 2.0′ Moniker Is Wrong“.   He agreed with Andy that the techniques deployed in an enterprise 2.0 approach are useful but went on to say:

“I think something more significant is at work, and those things called Enterprise 2.0 form only one bit of this bigger whole. The world in which work exists has changed fairly drastically in recent years, and so we are seeing a fundamental reset in the nature of work. On a secondary level, this translates into changes in how people communicate, coordinate, and collaborate, and this, then, leads to changes in information technology and related practices.”

He went on to suggest that Howlett’s post was context for his point that the enterprise 2.0 term wasn’t a particularly useful characterization for the spread of web 2.0 technologies and practices in the world of business.  In the post Stowe confirmed he is an advocate for using the web 2.0 term, but here is a case in point on the language we use.  From around 2005 to 2009 it was a regular description for the interactive web, social networking, sites that allowed user generated content, a type of user experience with Java code, and even the design style of the websites involved (lots of white space and rounded corners).  The 2.0 term is still around (2.0 Adoption Council, Web 2.0 University™), but it is very rare that I hear any of my colleagues use web 2.0 as a descriptor in the way that I would have heard it day to day 5 years ago.

Stowe’s post went on to talk about the social contract between the company and either their employees or customers.  He highlighted that consulting firms like Dachis Group and Altimeter Group were beginning to talk about “Social Business”, and argued that the enterprise 2.0 term might be holding us back.  He suggested a shift away from focus on technology and emergent tools (as in McAfee’s definition of E2.0) and towards behaviour:

I’m with him 100% on the concept, but I think he, Dachis, Altimeter, IBM and the Enterprise 2.0 Conference (with the way they are positioning their next conference) are all adopting the wrong term.  Social Business is already taken by something very different.  For such an important topic we need clarity rather than always having to explain to executives that it’s not that social business, it’s this social business.

At the recent Dachis Social Business Summit in London I reported on J P Rangaswami’s awesome opening keynote.  He started by raising concerns over the term “Social Business” (and how I love him for that!).  He wondered why do we need business to be social?  If it isn’t social, what is it?  Anti-social?  That’s the other side of the coin of my argument – business has always been social.  We need a better term.

So I’m left with two problems:

To be constructive, I’ve decided to start a meetup called Amplified Enterprise – details and venue (a website and a twitter ID) to be announced here shortly, once I’ve convinced some particular experts (with some strong opinions who I trust) in to attending the launch edition.  Anyone who is interested can come along and discuss the “social media in business” topic, and one of the first challenges will be to see if we can come up with more appropriate language or whether I’m the Cnut.

Update: This post suffered a weird comms error that meant an early unformated version was posted for the first 24 hours or so.  Communications from Istanbul aren’t perfect, but I got to another Internet café and it’s corrected now.  I had compounded the embrassment by calling Mr. Shirky a Sharkey – humble apologies to him, and thanks to my occasional editor and mentor David Tebbutt for sorting me out.