I remember September 11th the way my parents’ generation remembers the assassination of John F. Kennedy. Except that we invariably ask each other the question, “Where were you when you first saw it on TV?” (for me it was through the window of a restaurant in Union Station, in downtown Toronto. I was on my way to a client meeting). 9/11 was so profound that my husband and I discussed whether it was responsible to bring children into such a world. In the end, we decided that hope in the face of horror was the best revenge EVAR, and our son was born the following September. 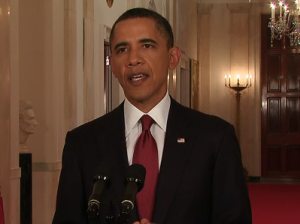 Watching this evenings’ handling of the announcement that Osama Bin Laden has been killed, I stand in awe of the White House and their masterful understanding of how news is now realtime, and the role that Twitter plays in the information cycle as “circulatory system”. Knowing that seeing the President announce that Public Enemy #1 is dead, and making that emotional connection, human to human, is of critical importance, the White House brilliantly managed information release around the announcement.

10:00 – we were informed that there was to be an important announcement regarding “national security” at 10:30 – Twitter immediately lit up with speculation
10:20 – the announcement is delayed, and strong speculation that it’s about Osama Bin Laden’s death starts to emerge
10:25 – Twitter is on fire, with a tweet from a CBS news Producer (with fewer than 4500 Twitter followers) confirming a leak that Bin Laden is dead retweeted over 1000 times
10:50 – The White House invites Facebook users to discuss the pending announcement (where the Presidential address is also scheduled to be broadcast)
10:53 – print media demonstrates where it can’t compete so well, with a journalist for a major national magazine noting that this announcement was going to “profoundly screw up” their Royal Wedding edition.
11:15 – Osama Bin Laden’s death confirmed by the White House
11:22 – We’re still waiting for the President to speak on TV

So what does this demonstrate? That the White House and their understanding of how the news cycle now works is absolutely masterful. Why announce on TV first and then let social chatter flutter and die in its wake? Use social to ramp up awareness and discussion – use it to get me to call my mom and ask her if she’s going to watch the Presidential address on CNN in order to maximize viewership against that all-important eye-to-eye moment – and then let us armchair quarterback the whole thing on the social channel of our choice for the rest of the evening.