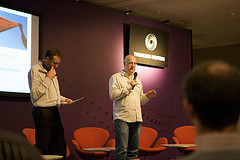 Last Wednesday was the latest incarnation of Amplified, the network of networks that a group of us started last year, and which has grown and evolved in to a grass roots, non-profit movement of likeminded practitioners in many fields connected together by the social media topic.   The £1.40 Unconference, was hosted in excellent surroundings at Reuters HQ at Canary Wharf and focussed on the power of Twitter applied to the political process, news gathering, and communications in general.  Toby Moores (@sleepydog on Twitter), who was master of ceremonies for the event, suggested the attendees are the 10% who “get it”.  That may be so, but I hope the 10% can amplify the topic to the rest.  The unconference wiki describes the event as follows:

“In response to the apparent diminishing returns of the high-cost/low-return nature of so many modern tech conferences – particularly relating to ‘microblogging’, it was suggested that we should organise a free conference based on knowledge sharing more than empire building. @sleepydog made the genius suggestion that it should be called the “£1.40 Conference”, and thus it was born.”

People could pay £1.40 or what they wanted to attend, but with a recommendation to pay more, and all proceeds went to the Indonesian disaster appeal  (www.dec.org.uk).  Reuters were great hosts providing good food and refreshments, and wifi that mostly worked (although the corporate firewall blocked any email in and out ).  The format allowed for 3 sessions, each introduced by an expert, and then everyone discussed each topic in small groups of 5 or 6 or more.  Everyone was encouraged to Tweet a summary or the coolest idea they heard with the hashtag #1pound40 so the output was captured.  Various Amplified team members were live blogging, capturing video or using audioboo to publish the discussion.   Sadly I could only stay for two of the sessions. 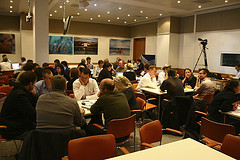 Dominic Campbell of FutureGov introduced the “Twitter in politics” topic, commenting that the reason he was up there speaking was mainly because of people listening to his tweeting over the last 18 months.  My table included Scott Gould (@scottgould), Andrew Gerrard (@andrwegerrard) and Tom Ollerton (@ale_2point0).  We juxtaposed the negative potential for mob rule with Twitter against its immediacy as a news medium, and the democratization of information moving to the hands of the many, rather than a few journalists and editors.  We talked about the BNP on Question Time, Jan Moir, Trafigura, protests in Iran, and aircraft crash landing on the Hudson.  I don’t usually bring my own politics to these sessions, but I talked a little about being a local (parish) councillor and the difficulty of connecting with the voting public.  With conventional newsletters and surveys through doors we only get a response from a tiny fraction, less than .5%.  If we can follow Obama’s lead and use social networks and Twitter to engage more people in the political process, that has to be a change for good.  We discussed how use of Twitter, producing videos with Flip cameras, or audio with an iPhone or digital recorders has lowered the cost of production so that the traditional media aren’t the gate keepers they used to be.  Scott was talking about social media facilitating an altruistic culture, and Benjamin Ellis (@BenjaminEllis) turned up on our table and chipped in that the medium provided a different social contract to a conventional 1 to 1 agreement in private or over the phone, with the rest of the audience involved to ensure there isn’t a breach.

Actually the discussion has triggered me in to helping and advising my local LibDem parliamentary candidate for St. Albans, Sandy Walkington, to get on and use Twitter – I’m briefing him on Monday.

In true serendipity, when my Vaio ran out of power and somebody offered the socket they were using  over by the wall, that made me join a different table for the next session on News.  Richard Sambrook, who I’d met earlier, introduced the topic to the room highlighting that information isn’t the same as journalism and talking through the new complexities that reporters and editors are dealing with.  He explained how Twitter can provide immediate coverage of an event, but that you have to disentangle truth from rumour.  For the discussion I had joined a table with a very different perspective than I expected.  2 people from Spain, 1 from Morocco, 1 from Argentina plus an Australian.  The media in  Spain, Morocco and Argentina are much more controlled  than we are used to in the UK, and so there was plenty of discussion about how Twitter can circumvent that process.  One of the keys of how Twitter can change the game is the direct connections it can provide between the source, the audience, and the reporter (whether it be citizen or professional).   I made some great connections for the future (including @cataspanglish and @Moof).

Everywhere you looked there were people live blogging, tweeting, recording audio, or video as well as debating intensely. Although I liked the format, I think the discussion sessions were too long, and at least 1 or 2 more topics could have been covered in the available time.  I was disappointed to miss the 3rd “people’s choice” topic, and the round up panel session at the end, although I could follow some of it on Twitter.

The title of this piece was inspired by a quote from one of Bertand Duperrin‘s student’s that he tweeted this week.

That’s very definitely what #1pound40 was all about.  All of the social media faithful in the room get it.  We have to use our collective communication skills to connect with the average person in the street and help them engage on many levels, and particularly to breath some new life in to the political process. 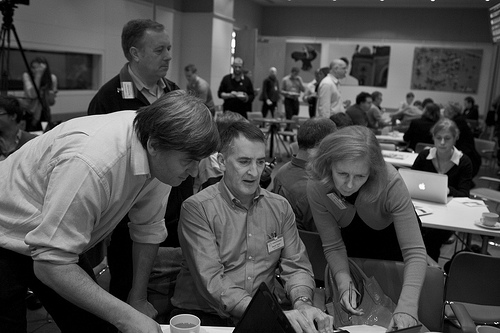 Don’t forget to look at some other perspectives on the day: