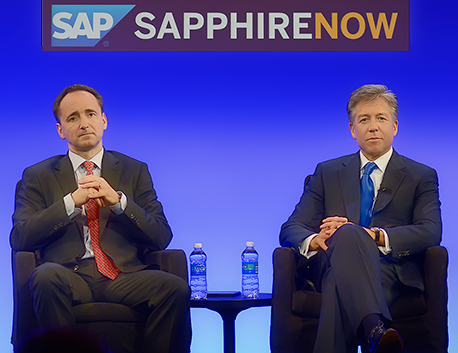 The SAP brand is synonymous with both small- and large-scale enterprise software deployments. Given its substantial market impact, and the company’s ability to influence the enterprise industry as a whole, it is important to understand SAP’s plans to simplify implementations and reduce customer pain associated with software rollouts.

To research this post, I had formal and casual conversations with quite a few members of SAP management including both co-CEOs, Bill McDermott and Jim Snabe. I also spoke with Executive Vice Presidents, Senior Vice Presidents, and folks at the Vice President level. To gain perspective, I met with several customers, including three who are part of a new program called Rapid Deployment Solutions. In addition, I asked the CEO of the America’s SAP User’s Group (ASUG), Bridgette Chambers, for her perspective. Finally, I participated in a recorded panel discussion (registration required) that explored these issues.

SAP’s evolving implementation tools strategy. Based on these meetings, and others that took place before Sapphire, it appears SAP is a company in transition with respect to implementation issues.

In the late-nineties, SAP introduced AcceleratedSAP (ASAP), which consolidated a standard implementation process and set of tools for ERP deployments. (I was deeply involved in creating the ASAP tools and even wrote the first installer myself.) Even though SAP still uses the AcceleratedSAP methodology today, ASAP peaked as an SAP focal point around the year 2000.

In the years following 2000, SAP continued development of its “Best Practices” program, with similar goals as ASAP, but did not give this program the same level of marketing support as AcceleratedSAP. Back in 2006, one blogger wondered how many people were even aware of the program. Regardless of being well known (or not), these Best Practices laid an important foundation for SAP’s work on implementation improvement. Two years later, in 2008, I wrote: “Rooted in work started in the mid-1990s by SAPâs Simplification Group, SAP Best Practices advances the implementation state of the art.”

We took lessons learned on how to package solutions and make them easy to consume and built solutions appropriate for some of our larger customers in the large enterprise (LE) space. We also took things we learned from our methodology on how to deploy consulting, called ASAP, and brought them to the next level.

[M]any of the components and elements of RDS come from SAP’s All-In-One programs which helped to develop many of the solution accelerators, best practices and tools that now make-up this new ongoing RDS effort.

Prioritizing implementation. With AcceleratedSAP, SAP made a global, and highly public, Board-level investment to improve implementations. During the last ten years, despite programs such as Best Practices and consulting quality initiatives such as Safeguarding, implementation-related innovation became less visible.

Today, the view that implementations are a worthwhile strategic and competitive battleground seems to be gaining ground inside SAP. Consider the following points:

According to SAP’s Senior Vice President responsible for RDS, Robert Viehmann, the company plans to deliver these new solutions widely:

Raid Deployment Solutions are becoming the new default inside and outside SAP to deliver ready-to-consume solutions reliably across the entire SAP portfolio.

The issue of pain related to implementation is not an academic or abstract topic. Enterprise customers (of SAP and virtually all its competitors) waste too much time, money, and resources on the implementation process itself. It’s time for the major vendors — SAP, Oracle, and so on — to address this challenge in a substantive manner that goes beyond marketing pronouncements.

“Packaged” or “productized” services and solutions offer an important method for enterprise software vendors and service providers to reduce implementation risk and increase predictability for customers. These solutions bring together software, best practices, and a highly defined process for delivering services, so customers pay less to implement core software functions and can go live faster.

As far back as 2006, the British Computer Society described the potential of packaged solutions to disrupt established professional services providers (emphasis added):

For IT services, pay-as-you-go consultancy provides a solution that allows companies to deliver business services faster while maintaining maximum control over IT infrastructures. Productized services with the ability to deliver rapid return on technology investments will shape the future of IT consultancy.

In that same year, this blog discussed the compelling benefits such solutions bring to customers:

Enterprise customers are weary of open-ended, hourly consulting arrangements. These deals often favor the vendor, taking advantage of the human tendency to slide toward complacency and the status quo. In other words, open-ended contracts frequently lead to bigger and bigger projects, scope creep, and a host of other ills.

Packaged, productized, and standardized services are here to stay in the enterprise software market, including in ERP. Forward-thinking services organizations are already moving in this direction, and dinosaurs who ignore the obvious will be left behind.

At that time, I predicted that packaged services would be disruptive to the professional services business in a way that benefits enterprise buyers:

If youâre an IT consulting company or an enterprise software vendor, better start thinking about productized services if you want to remain competitive.

Regarding SAP’s new and apparently higher priority stance on implementation, only time will demonstrate the company’s long-term commitment to innovation in this area. To achieve its goals, SAP itself must undergo internal transformation, which requires sustained effort over a lengthy period.

So far, the signs point in a positive direction, but I look forward to tracking progress.

Advice for CIO’s. During vendor selection for both services and software, ask questions about the proposed working relationship. For example:

[Photo of SAP Co-CEO’s by Michael Krigsman. SAP paid out-of-pocket travel expenses to Sapphire and is a thought leadership client.]