Lot of talk about site speed recently – no wonder, with Google factoring page load speed into their Page Rank algorithm it’s becoming critically important for websites, including blogs.  I was a bit surprised to read the list of the slowest loading websites on the TechMeme Leaderboard, lead by Scobleizer. Why surprised ?  Because just days ago I read Robert bragging about how fast his site was – or so he thought:

Do you own a website or blog, like I do? Is it as fast as it absolutely could be? I thought so, after all, my site is hosted at Rackspace where we have huge datacenters and huge pipes and a great CDN.

Yet even he thought he could improve by installing CloudFlare,  a CDN with a good deal of security features which has received a  lot of publicity recently. Well, we don’t have those huge pipes, so why not try … installed CloudFlare both here @ Enterprise Irregulars and over @ CloudAve.  The installation process was absolutely, amazingly easy – especially for a change involving DNS / nameserver setup, which normally is as painful as a root canal.

Next I checked page load times using Pingdom’s load test, which CloudFlare recommends themselves: our load times not only did not speed up, they got somewhat slower after the transition to CloudFlare

I read a zillion reviews and 99% of them claim a speed improvement .. so this thing must be working… at least for everyone else.   But speed issues aside, I decided to stay with CloudFlare at least for a while, as it promises to protect one’s website from all sorts of malware and attacks –ironically Public Enemy No 1 LulzSec survived several attacks since they were protected by CloudFlare.

OK, it’s not only LulzSec, all the good guys are also praising CloudFlare, so I am trying to love it… but numbers are numbers, and the first stats I’ve received from CloudFlare are rather shocking. 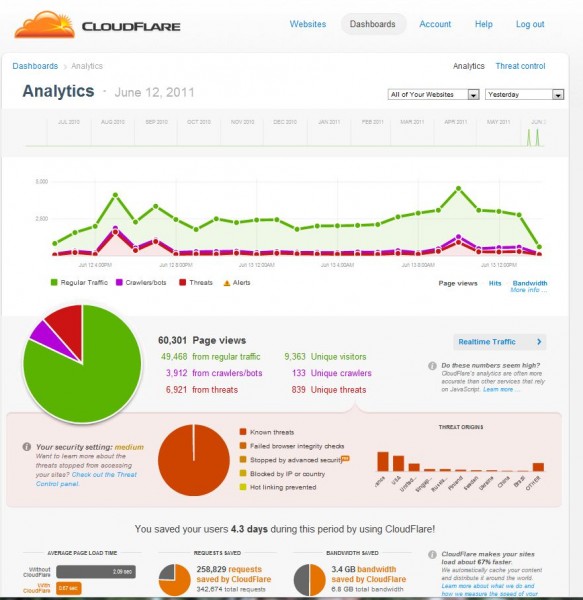 After the first day, CloudFlare registered over 60k pageviews between the two sites, which break down to  34K for CloudAve and somewhat less for Enterprise Irregulars.  Wow, that’s nice traffic – too bad it’s unrealistic.  There’s some blurb on the CloudFlare site on why their stats will be higher than Javascript-based reporting tool, but I seriously doubt that explains this much growth.  And what’s that 6K threats?  Where have all those been hiding before?  But hey, what do I know… perhaps they really are right… except: 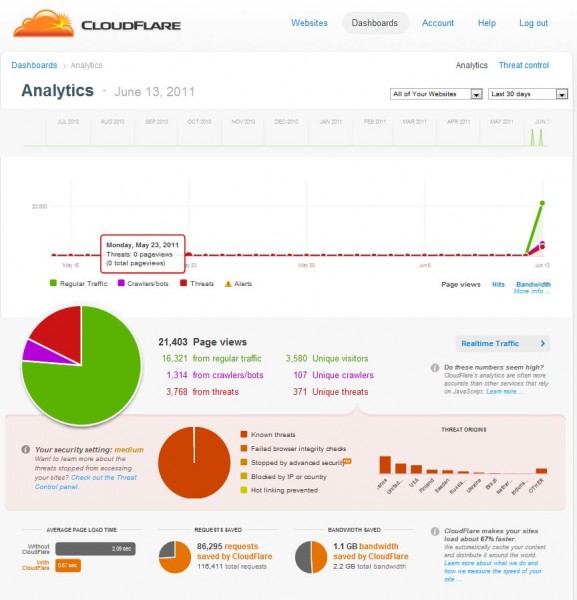 Let me get this straight: the 30-day numbers are actually lower than what we got in just one day? Something just does not compute.  And it’s really too bad, because if I can’t trust these numbers, than why should I trust the threat control listing, or CloudFlare’s own numbers which show my sites run about 50% faster than before (contrary to Pingdom’s stats).   I am trying to like this service, simply on the basis that so many smart people can’t be wrong, but these numbers are baffling.

What’s your experience?  If you have a website, do you use a CDN, perhaps CloudFlare?  Please chime in below.  CloudFlare team is welcome to comment, too

22 responses to “Hey CloudFlare, What’s Wrong with these Numbers?”