Evernote has recently celebrated their third birthday. I also recently had my 21st birthday – it feels good to be able to legally grab a drink finally

.  (Hey, if Evernote can lie about their age, so can I…).   Joke apart, I have no idea why a company would pretend to be half as young as they really are – there are quite a few users, yours truly included who remember the early product, back from 2005-2006. 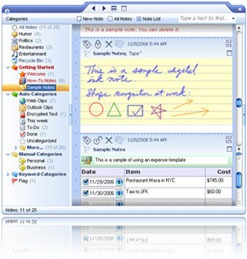 OK, so back then Evernote was really nothing more than a scrawny little note-taker, with a weird scrolling tape metaphor that was hard to get used to, but it already showed unusual flexibility of mixing typed and handwritten text with imaging. Still, the key benefit was price, compared to Microsoft Onenote.  It’s hard to compete with free.

I was truly surprised by the news of their first funding round. Here’s my offending post from 2006 (hm, before they even existed, if you believe the birthday news…):

EverNote – Love You and Hate You

EverNote is the last company I expected to raise venture funding: has a mature product, a mix of freeware and a $35 version, and I pretty much considered them a good candidate for safe, organic growth. GigaOM just reported it EverNote’s funding to the tune of $6M. Wow…

My Love & Hate relationship? The love part is easy to understand; it’s a handy, easy-to-use notetaker, which I prefer to the comparable Microsoft OneNote, and the $0 price is quite unbeatable. The hate part: it really does not fit into strategy of moving off the desktop into the Cloud.

In fact it’s the only application that breaks my sync efforts between two laptops using FolderShare: if EverNote is loaded at bootup (which is the best way to use it), it will “renew” it’s data file even on the PC I am not actively using, and FolderShare will attempt to overwrite my good working copy with an older one (which however has a newer time stamp). The only solution: remember to remove EverNote from the auto-launch sequence on the secondary computer. Yet another reason why it’s safer in the Cloud.

My ideal solution would be an option to use EverNote on a data file stored online. Perhaps the $6M will cover this, too (?).

In response I received a nice email from the Founder, explaining their long-term strategy, which included some of my Cloud dreams.  But somehow I could not get used to the scrolling tape UI, and soon after abandoned Evernote.

A few years later the iPhone and our new level of mobility gave a tremendous boost to Evernote’s popularity.  It’s not longer just a scrawny notetaker, in fact it is no longer just a notetaker – the company likes to refer to their products as one’s digital brain, and it’s not far from the truth. Watch this funny video:

You can literally throw anything at Evernote: text, Word doc and spreadsheet, PDF, images, video, handwriting and voice.  Chances are if you’re sitting at a computer, you’re just managing your files, but Evernote really shines when you’re out in the real world, with your mobile phone: use text input, record a conversation or voice memos directly, take a picture – whatever the input, Evernote handles it, with added smartness.  It will analyze your images and convert any recognizable text, thus making them searchable – a great way to “memorize” places, street signs, product labels…etc. Needless to say it runs OCR on your PDFs, too ( I might add it’s recognition is better than the OCR that came with my HP scanner.)

Best of all, it is platform-agnostic.  You can be on a PC, Mac, iPad, iPhone, Android, Windows Phone 7 and a number of other platforms,  Evernote has a client for your device, and seamlessly synchronizes your data between them – or just use the native Web UI.  As always, there is a little trade-off: the myriad native apps are all at different stages of development and there are feature and UI inconsistencies when you use several of these devices.

Finally, it has an ecosystem of value-added product / service proveders, the Evernote Trunk.

I admit I’ve become their slave (again) – I find myself manage bigger and bigger chunks of my digital life in Evernote.  When I started using it again, I thought I would just be using it for notes.  Then I realized I can manage my PDFs a lot better ( I have a lot of PDFs, in an effort to get rid of paper, I scan anything and throw away the originals) and from there the next logical step was to recognize I can organize all my docs easily.  Smartly utilizing all organizational tools – several notebooks, stacks of notebooks, tagging, combining several original docs and images into one note…etc creates a document management system far superior to the ancient Windows folder / file system (how dumb is it for Windows to still not support tagging?)

Now, most recently Evernote got “wiki-ized”:  internal linking to individual notes within and across notebooks rounded out the already impressive set of features.

Yeah, yeah, you may say, but what was that about the Billion-Dollar Club?  Well, last weekend TechCrunch speculated about Evernote picking up another $50 million funding from previous investor Sequoia Capital, at a mind-blowing valuation over a billion dollars. Wow.  What can I say?  I don’t want to start Bubble Talk

but since I had once made the mistake of underestimating Evernote, I am not going there again… let’s just say, valuation aside, Evernote is the one tool I just can’t live without. My Digital Brain.

But I want to finish this like I did 5 years ago – with a wish-list.  It will be short: better collaboration.  Premium users ($45/year) can already share notebooks and collaborators can edit / update each others’ notes.  But it’s not proper collaboration, as Web Clipper, the one tool that makes it really easy to collect and organize information does not work in shared notebooks. Clipping only works in one’s own notebook, thus collaborators end up having to use multiple notebooks – but there is no easy way of moving notes within own and shared notebooks, so we end up collecting information in stovepipes.  This is all reasonable, since Evernote started out as an individual productivity tool, and is now catching up with the social wave. But I trust this, just like my wish 5 years ago will soon materialize.  And who knows, by then Evernote may join the Ten-Billion-Dollar Club.