Inappropriate Performance Review Phrases (We’d All Like to Use) 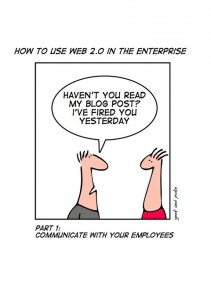 James Neal wrote the book “Effective Phrases for Performance Appraisals” many years ago. Today, it’s in its twelfth edition and has sold more than a million copies. BusinessWeek even noted this event.

As much as I enjoy praising the virtues of great employees, it’s the less than stellar ones I, and I suspect many of you, struggle with mightily. We rack our brains looking for those exact, precise, clear-cut and definitive words that basically tell them “You screwed up and you’ll be gone soon unless you do a 180”. But what are those words? Why isn’t there a book for these gems?

Well, I think it’s time we start collecting the phraseology for the underperforming or malcontents under our supervision. Herewith are some starter phrases that might be a tad bit too strong for that next annual review you conduct. And of course, make sure your HR team signs off on any of these before you use them.

1. “Couldn’t find a successful path to complete this project even if we gave him a GPS”

2. “Wanting and getting a raise/promotion are two different things”

3. “Approaching his deliverables is like approaching an outhouse – you just know they’re going to stink”

4. “He talks to himself – a lot – because he likes the sound of his voice better than mine or the client’s”

5. “If I wrote a performance review as poorly as he writes, it would say ‘UR GRAMR SUKS”

6. “Has set a new standard in work performance – unfortunately it’s not good one”

7. “Employee wants the firm to sponsor his attendance in a foreign language class. I suggested he learn some English phrases first like ‘on-time’, ‘on-budget’ and ‘performance plan’”

8. “Asking out our married CEO on a date was not a good career move”

9. “He set a department record for the most dead relatives, sick pets and 24-hour bugs in one year”

10. “Thinks we don’t know that he catches 40+ daytime baseball games a year. Even customers complain that their calls can’t be understood over all of the stadium noise”

12. “Could have tattoos all over his arms but we’ll never know as he hasn’t rolled up his sleeves and gotten his hands dirty in years”

So what phrase have you been itching to use? Got a favorite that speaks volumes about poor performance? Send it along and share it with us.