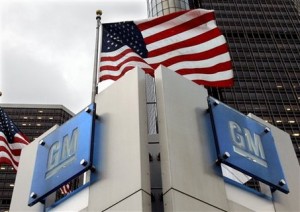 General Motors, encouraged by its improving financial situation, could repay all of its $6.7 billion in loans from U.S. taxpayers by the end of next June, the company’s top executive said Monday.

Let’s recap what is going on at GM. The Federal government – aka “us taxpayers” – gave GM $57.6 billion in exchange for equity in the company and a debt instrument for $6.7 billion, which is referenced in the above pull quote.

One of the favorable consequences of reorganizing GM in the bankruptcy court is that the company was relieved of servicing the $50+ billion in corporate debt that they had accumulated and suspended payments to their employee pension fund. What all this means is that $GM’s fixed burn rate went way down… way way down.

So fast forward to today and we learn that GM posted a loss but increased it’s operating cash by $3.3 billion. The increase in operating cash is what is really important, not the accounting loss… but it’s no surprise that they increased their cash considering that they didn’t have all that debt to pay interest on and then there is that $25 billion owed to the VEBA trust (another employee benefit expense) that payments were suspended on until December.

GM has the chutzpah to hold up high their plan to pay back taxpayers with the same money that the taxpayers originally gave them and claims that their increasing cash position as a consequence of not having to pay the VEBA Trust and the now extinguished bondholders is a win… really.

Let’s talk in January after they pay $10 billion to the VEBA Trust, $8.1 billion to the US Treasury and Canada, $2.8 billion for the fiasco at Delphi, and another $900 million for Canadian worker benefits.