The elephants not in the SaaS room

A few weeks back I was in San Francisco to attend All About the Cloud, probably the most important annual gathering of enterprise SaaS vendors. As I walked down the street from my hotel, I noticed quite by chance that Citrix was having its annual conference at the very same moment just three blocks away from the SaaS event. Despite the proximity, there was no discernable Citrix presence at the SaaS event. For me, this was a telling contrast with a decade before, when Citrix had been a commanding presence at every convention of application service providers — mainly because the majority of these primitive SaaS pioneers depended on Citrix terminal server technology to deliver hosted applications to customer desktops.

Nor, for that matter, was VMware at this year’s All About the Cloud. Of today’s leading virtualization platform vendors, only Microsoft had a sizeable presence at the event. 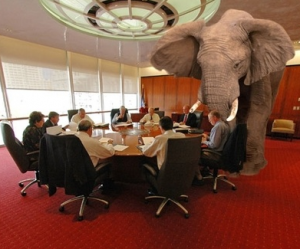 At the time, VMware’s absence made me think of the phrase ‘the elephant in the room’ — especially as the show was taking place just days after the official unveiling of its Horizon App Manager, which aims to help enterprises manage user access to cloud applications. What with the April acquisition of SaaS slideshow platform SlideRocket and the launch of the Cloud Foundry development platform, it struck me that VMware was the elephant NOT in the room at All About the Cloud. (Perhaps it was lying low as part of a strategy that Robert Scoble has called “[not] waking up the bears” of enterprise software). Within days, it had added SocialCast and Digital Fuel to its roster of cloud-related application acquisitions, making its absence from the show even more surprising.

Meanwhile, after this week’s news of its Cloud.com acquisition, the absence of Citrix from the SaaS scene becomes equally glaring. The two biggest technology beasts of the cloud infrastructure layer are not making their presence felt in the SaaS vendor community, even though they clearly have a huge role to play in its fortunes. Why are these two elephants not in the SaaS room? Are they about to break down the doors? Or do they feel the SaaS layer of cloud is not worth their attention?

When I’m going around talking to enterprises about their cloud strategy, one of the first things I make sure to point out is the huge spend going into the application layer of the cloud stack. While pundits and tech media focus most of the limelight on the infrastructure layer of cloud, whether public or private, market research consistently shows that what enterprises are actually buying in the cloud is mostly SaaS. The problem for vendors like Citrix and VMware is that the economies of scale when delivering cloud applications in volume are so great that very little of that spend filters down into buying their virtualization products. Perhaps that’s why VMware is so eager to extend its ambit into the platform and application tiers. Even the largest SaaS vendor is a relatively insignificant customer for its cloud infrastructure products.

While vendors with the size and scale of Salesforce.com and other large SaaS providers such as NetSuite, Concur, SuccessFactors and Workday are likely to continue to own and operate their own infrastructures, smaller SaaS players will likely gravitate to running on third-party cloud infrastructure. The real battle between VMWare and Citrix is to become the platform of choice at this layer of the stack, and perhaps that’s why they’re not bothering to court SaaS providers: their customers will be the telcos, hosting companies and pureplay IaaS providers that in turn will market their cloud platforms to the SaaS sector.

2 responses to “The elephants not in the SaaS room”