After this morning’s more technical sessions, the afternoon of the IBM analyst event this year reinforced the non-technology driven speaking-agenda that IBM has been going on about over the past year, that being “Smart Planet.” That phrase has has come to wrap two things:

When IBM first foisted this framing on us analysts, it drove us all mad: we don’t like following business as a technology in itself, we just like technology. What IBM’s trying to do is make businesses more programmable, essentially, by injecting enough IT as possible into every part of it. Then, assuming a business is properly “instrumented,” you just roll out changes to the technology to change the business. That’s the metaphor at least, and it’s driving towards IBM hoping to create a new market for its assets.

Peppered through-out this high-level stuff are glimpses of what the new, underlying technology is and some cases of how customers are using this new technology. It can be frustrating, for example, to sit through a Tivoli talk and just get to actual products, services, and new features therein in the last part of the talk.

In that context, here are some highlights for the afternoon here:

The context above was mostly drawn out here, with some interesting technology/innovation bullet points:

Al Zollar’s Tivoli talk has reflected the business vs. technology split IBM’s been dealing with. Tivoli talks start out speaking about non-IT networks that Tivoli is helping manage – energy, water, etc. – and then quickly wraps up with some new technology highlights: 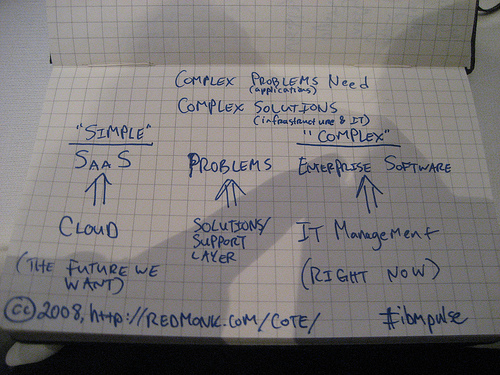 The last session of the day was co-hosted by Rational and Tivoli GMs Danny Sabbah and Al Zollar on the topic of getting development and operations to be more friendly with each other. There were several good wall of confusion slides to make the point about the prima donnas (dev) and knuckle-draggers (ops) thinking poorly of each other. And while there was no one product or even set of practices that IBM seems to be going to market with at the moment, the promise was that they were working on it.

Much of the emphasis revolved around “meta-data” and policy enforcement. The idea being to have more feedback and enforcement between development and operations with respect to what the production system would/must look like. Danna Garder raised the idea of PaaSes having enough constraints that there’s not really much of dev/ops hand-off. Indeed, slicing in virtualization, automation, and the sort of melding of the developer and operations role you hear at places like Velocity is the dream of all this dev/ops business.

Our own James Governor forcefully suggested that the problem was simply companies wanting to development on the cheap. He kept quoting Deutsche Bank wanting to pay £300 a day for a developer as not being enough to get top quality development. The issue being that if the Ration/Tivoli offering was promising cheap costs, then the result would still be cheap. The discussion here merged into the usual “the top percentages best practices don’t apply to the lower percentage” discussion that you get involved in during software deliver productivity blue skying: whatever rockin’ stuff Google is doing isn’t going to work at Boring Giant Company, Inc.

At this point, the discussion for IBM is about potentials vs. shipping product. Interestingly, Zollar said that their customer base is not actively asking for this tighter dev/ops integration: “the marketplace is not pulling this out of us.” Which gets to the pacing IBM takes with concepts like these. We’ll have to check in next year and see what’s happened. It’s a tough nut to crack without being too disruptive.

Disclosure: IBM is a client and paid T&E.