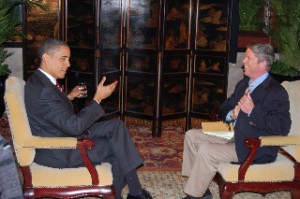 I read this short Reuters piece on President Obama’s Fox interview last night and simply thought “who are these people?”

Here’s my edited version of the full piece:

BEIJING, Nov 18 (Reuters) – President Barack Obama gave his sternest warning yet about the need to contain rising U.S. deficits, saying on Wednesday that if government debt were to pile up too much, it could lead to a double-dip recession. His crack team of economic advisors made the previously undiscovered link between deficit spending and negative economic consequences on Tuesday night and defended the $3 trillion in debt accumulated in 2009 as necessary spending to expand the role of government , denying that any link between massive public debt and economic conditions was evident before Tuesday.

With the U.S. unemployment rate at 10.2 percent, Obama told Fox News his administration faces a delicate balance of trying to boost the economy and spur job creation while putting the economy on a path toward long-term deficit reduction, saying “because let me be clear, we have to get ourselves re-elected next year!”

His administration was considering ways to accelerate economic growth, with tax measures among the options to give companies incentives to hire, Obama said in the interview with Fox conducted in Beijing during his nine-day trip to Asia. With his team of economic advisors behind him, shuffling their feet and looking downward, Obama admitted that “basically we have no idea how to create jobs because outside of government payrolls we’ve never done that, we’re pretty much guessing at this point and anyone with a good idea should send me a tweet.”

“It is important though to recognize if we keep on adding to the debt, even in the midst of this recovery, that at some point, people could lose confidence in the U.S. economy in a way that could actually lead to a double-dip recession,” he said. With consumer confidence at record low levels, many argue that it’s hard to imagine that confidence in the economy could be any lower but the President needs Americans to keep buying Made in China to ensure the flow of recycled dollars into U.S. debt purchases.

Fox News, which released a transcript of the interview, showed that comment by Obama on Wednesday morning and said the full discussion would be broadcast later in the day. (Reporting by Caren Bohan; Editing by John O’Callaghan)

[From Obama: Too much debt could fuel double-dip recession | Markets | Markets News | Reuters]

2 responses to “Reporting from the Echo Chamber”