When Jim Highsmith graciously invited me to give the opening keynote at the inaugural Agile Executive Forum in Salt Lake City this week, I had to really sit down and think about what I’ve been working on the last few years, namely social business, as compared the conference theme, agility and business. While agile methods have had many separate and distinct threads within the business and technical worlds over the last 20 years, one of the most active areas has been in software development. For its part, social business is a much newer phenomenon that’s become a top priority for many business leaders in the last couple of years. So, while I’ll cover the details of my presentation — in which I connected agility and social business as drivers of innovation, in another post — I will attempt to more formally to capture the specific similarities here.

In recent years, as agile development has been increasingly borne out as a fundamentally better, more efficient, lower risk, and more cost effective way of doing things, there has been significant and growing effort apply agile lessons to business in general. And, as it turns out, agility and social business, as two major new ways of connecting and organizing people in directed activity, have plenty in common. Perhaps even more importantly, they have key things to learn from each other.

I’ve had quite bit of experience with agile methods personally, having led extreme programming project teams and been closely involved in large, distributed SCRUM projects in years past. I’ve seen agile methods work significantly better than classical processes. This is probably why it’s now the most common development process in software that developers identify with in my experience. Consequently, I’m in a position to see some of the connections between business agility and social business, in all their many flavors. The connection isn’t trivial either. There are hard won lessons learned from agility that social business initiatives could certainly benefit from. Just as there are innovative new approaches to scale, transparency, process, and tooling that social business brings to the table, as extreme and radical as they may appear to agile folks, who are more used to being the harbingers of change. 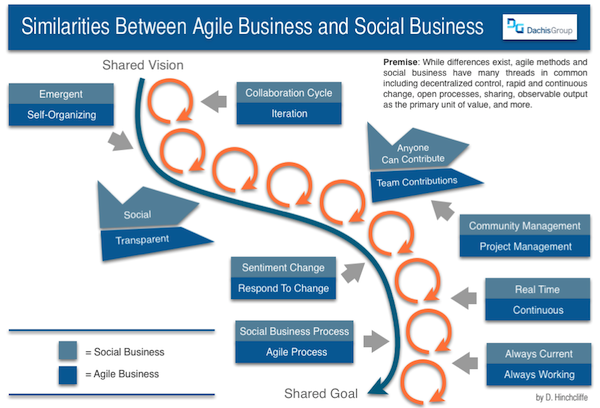 What’s the point of connecting these two approaches? Because they can learn a great deal from each other. Agile methods can be updated and modernized from what social business brings to the table, and social business can apply some maturity and rigor to what it does, as appropriate. This I believe is a fruitful exercise for both disciplines and is one I summarize below.

Keeping in mind that some agile process purists are still on the fence about applying the methods more broadly, the focus here is on agile processes of any kind as applied to general people-based business activities. Some processes are more amenable to agility, just as some are more amenable to social business. In general, however, the less collaborative, more rigid, and user-isolated a business activity is, the less applicable either agile or social media methods will be to it. However, if you have a complex, open-ended, and outcome-oriented business process involving many people, especially including those that it most directly affected (typically, the customer, internal or external), then both approaches represent the very best ways that we know of today to deliver successfully on them.

As you’ll see, agility and social have much more in common than they have differences. Here’s my take on how they break down:

This comparison just scratches the surface but is a useful start. I’m happy to be called out on any details anyone feels like I may have gotten wrong. I do believe that agility and social business go hand-in-hand and that we can cross pollinate the two to create far stronger results that either can by themselves today. Put simply, agile business and social business are two sides of the same coin. That may be a controversial statement to some but I believe that as far along as these two disciplines have come in parallel, they will do better with more explicit and effective connection. Our organizations (businesses, organizations, government, etc.) will almost certainly benefit.

What do you see as the commonalities and differences between agility and social?

One response to “Connecting Agile Business with Social Business”