Today comes news leaked from an internal HP all hands meeting that the company is not abandoning WebOS, 15 months after acquiring it for $1.2 billion. This is how we get all our news about HP these days, leaked memos and meeting soundbites. 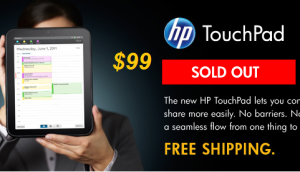 Watch for two main arguments being presented, the first by the tech pundit community and the second by HP itself in an effort to salvage whatever dignity remains after spending a lot of money on an acquisition that many people, including myself, said makes sense but then completely failing on the follow through.

First the tech pundits, who are centering on the IP is the main asset argument. In light of Googola that’s all we have been talking about for 2 weeks, right? So this simply has to be a no brainer for why WebOS is worth buckets of money… well maybe buckets of loose change.

It may well be that the remnants of Palm are sold off as a patent library but I have an impossibly hard time believing they will salvage even a symbolic victory from this. Estimates put HP’s acquired patent library at about 1,700 and for the sake of argument we can assume that they are predominately in the smartphone arena given Palm’s history.

Let’s say that 25% of those patents are coming up on end of life and another 25% are highly specific to Palm’s early devices and no longer relevant. So we’ll discount it by half and using Google per-per-patent benchmark of $550k per patent we arrive at a valuation of $467m, which is really dependent upon there being some competitive bidding for the assets otherwise it’s a complete fire sale. Not chump change but certainly a black eye for HP considering how much they paid for Palm last year, and then supported it through where we are today.

We also hear talk of licensing the WebOS… really? HP expects us to believe that HTC and Samsung are going to license an OS for which there is little app support, runs on hardware they don’t use (Qualcomm), is directly competitive with their other partners, predominately Android and Microsoft, and for which no hardware market success has been demonstrated? That’s the strategy?

I’m going to go out on the limb and just say right now that we have seen the last of WebOS (and when they go on clearance at Best Buy I am going to be in line to get one!).