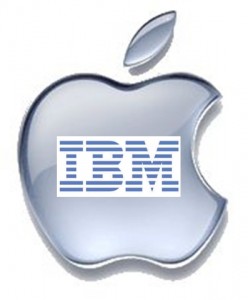 HP’s many announcements in the past weeks led observers to say this was its “IBM” inflexion point – deemphasize consumer tech, get more into enterprise tech. The interesting thing is Cisco and Dell are also going through similar therapy. I keep waiting for Microsoft to make a similar confession.

The funny thing is I see in different ways IBM longing for some of its consumer roots. Lexmark and Lenovo, both IBM spinoffs are doing pretty well. Watson was probably the biggest news maker for IBM this year. Its Smarter Planet commercials are aimed as much on consumers and citizens as their enterprise influencers and budget owners. Its big news in a booming mobile market was its sale of a few patents to Google.

The argument is IBM has shown enterprise revenue to be higher margin, more predictable etc. I would argue the better metric to use if what percentage of revenues comes from products introduced in the last 5 years and Apple, Amazon, Google blow IBM away by the wide margin on that metric. And my next book profiles enterprises in at least 50 industries that are developing “smart” products and services – smart pens, shirts, medical devices, digital citizen services. Somebody forgot to tell them the consumer market is not healthy.

The interesting thing is HP actually has one of the most robust tech supply chains in the industry – in my opinion (and based on research I have in the book) it is more robust than Apple’s. It is more geographically diversified beyond China, it has a better balance of company owned versus outsourced nodes, it handles a far greater variety of SKUs across print, PC/laptop/server and other categories.  Apple, of course, trumps it with executives like Jonathan Ive, Scott Fortsall and Tim Cook when it comes to industrial design, retail operations, App Store and other assets.

The biggest contribution Apple has brought to the industry is business model innovation. Its iPad has been untouchable from an economics perspective, but more importantly it has changed music (to allow us to buy singles versus albums), changed mobile markets (made device more important, commoditized carrier service – a dramatic shift), changed book publishing (by challenging Amazon’s $ 9.99 eBook price standard.)

Back to IBM. It is a classy organization and that deserves emulation on many grounds. But not so much when it comes to technology. Little has been written about the fact that underlying Watson for which it has received so much praise is Apache Hadoop, and that another consumer focused company Yahoo! has been the biggest contributor to that open source tool. IBM launched its Social Business initiative at Lotusphere – Lotus is two decades old technology! IBM first talked about On-Demand computing in 2001 – a decade later we are still waiting for its version of Azure.

And we need to wake up to the fact that IT budgets are not growing and if HP and Cisco and Dell and others fight harder for them, the dollars will have to come from the hides of incumbents like IBM.

So whatever future holds for HP (and Cisco and Dell and Microsoft) here’s wishing them more Apple and Google and Amazon moments.