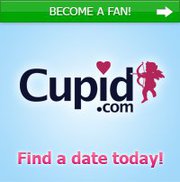 I’m still not signed up to Facebook, and remain as resistant as ever to the proposition. Facebook’s cavalier attitude to privacy keeps me away, and my resolve has been strengthened by the following email received this weekend from a happily married middle aged friend. It’s a salutary and amusing reminder of the many perils of Facebook.

Recently, being a bit wet behind the ears with Facebook, and only really being an occasional user, I clicked on one of the links at the side, which said something like ‘do you want to make contact with friends’. I assumed it was something like friends reunited but on Facebook, so I thought I would give it a whirl.

Without realising what I had done, and without any further active effort on my part (the original ‘yes’ was enough) I found that I was signed up to some kind of dating agency called cupid.com

Now, I am perfectly happy with my partner (ecstatic in fact), and the last thing I wanted was to sign up for a dating agency. So I tried to get out of it.

But I couldn’t. It had generated a password for me but I didn’t know it, so when I tried to change the settings it wouldn’t let me. After a lot of effort I managed to get it to send me the password, but only by making it think I wanted further involvement — I had to get more embroiled to get unembroiled, if you see what I mean.

Then I found that I couldn’t unsubscribe anyway, because ‘it appears that the country you subscribed in may not be the same as the one you are unsubscribing from’ (so what?).

This (with the help of [my teenage son], who was most amused) I found was because I have got the language of my Facebook page set to Italian, just for fun.

So in the end I am out, and I no longer receive 10 emails a day saying things like ‘there are hot chicks waiting to meet you’.

But it was hard, and I am very, very angry. And it has not encouraged me to become a more frequent Facebook user. I suppose it is all I should expect … But it is a shame that the world has to be like this.

With experiences like that to scare them away, is it any surprise that five and a half billion people on this earth still haven’t signed up for Facebook?