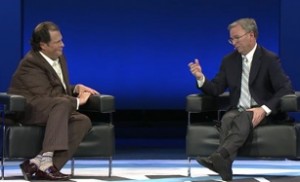 Necessity is the mother of invention and last year when Bill Clinton was late for the closing keynote, Marc may have discovered an ideal medium for closing out Dreamforce.  This year he perfected it.

I don’t know if Clinton was scheduled to give a conventional speech last year or a sit down interview I only know that in selecting Stevie Wonder as an interview subject, the limitations of the situation bred a new kind of closing ceremony and enabled a new level of customer or audience intimacy.  Mr. Wonder is many things but one thing he is not is a stump speaker like the former president.  In selecting Wonder, Benioff had to accept that limitation and from it the interview format was a natural outcome.  But who knew the Marc could be such an engaging interrogator and listener?

This year the interview was established and organized as much as such a thing can be.  In selecting Eric Schmidt of Google, Benioff called on a friend of several decades, a former colleague at Oracle and an individual who has by any measure lived the life of a highly successful Silicon Valley entrepreneur and innovator.  Benioff and Schmidt spent more than an hour discussing the evolution of their industry and setting what Dreamforce had been all about in that context.  When you left it was still possible to think of an alternative universe, but only with great difficulty.

In fact, there is no alternative universe.  You get what you have and what we all have is an industry that is leading business into the new century and a new era.  That era is mobile and social, it is connected physically and emotionally and increasingly the connectors are technologies.  It is also rapidly iterative and Salesforce was careful within Dreamforce to ensure it touched all bases.

Benioff’s breakthrough with Schmidt at this year’s Dreamforce was the realization that other people could carry the ball and deliver the same kind thought leadership that Salesforce is delivering.  Salesforce has always been about extending thought leadership; about getting people to imagine a world without the complexities of conventional IT.  The closing interview didn’t just expand that franchise, it sent a lot of people home knowing they were on the right track and doing something important.

One response to “Eric Schmidt and Marc Benioff”