A Social Baptism for the Enterprise. Hallelujah and Amen.

About this time last month, I was undergoing a crisis of faith.  Faith in what brought me to this space: the promise of what the next generation web could be and could do to change business as we know it, as well as society at large.   My faith was shaken by a few ripples in the foundation.  I posted this short blog post on our Council Jive site: 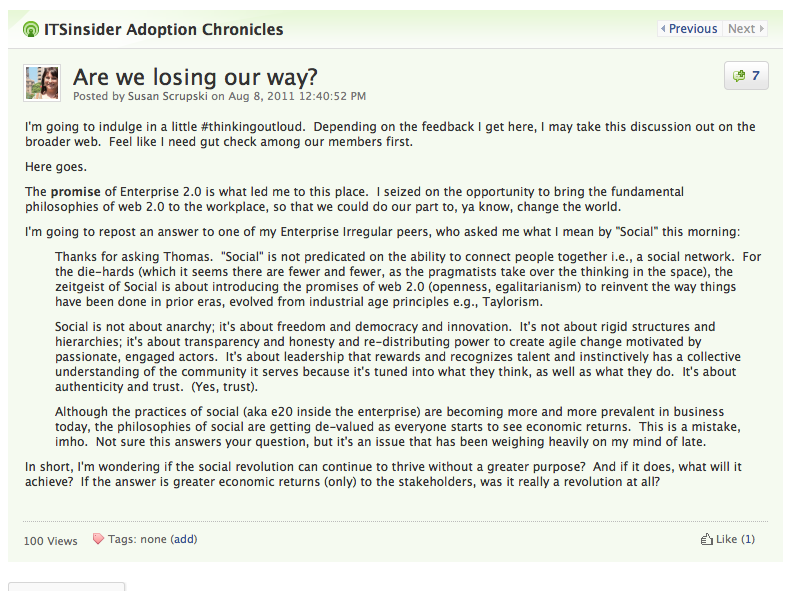 I got some great feedback from members, but remained somewhat in a state of insecurity.  Things exacerbated when later in the month, a host of conversations had cropped up in the blogosphere on the failure some individuals were experiencing regarding adoption of social technologies inside large enterprises and critics taking delight in the “I toldya so” grand opportunity.

As the summer of 2011 was coming to an end, I found myself wondering whether I was the only one pursuing some greater purpose? Had I been completely delusional?  Blindly naive?

Mark Benioff, Salesforce.com CEO, whom I’ve been heralding as the voice of the new Enterprise generation since I saw him speak last year, killed it in his opening keynote for Dreamforce 2011 with the messaging I (and many others) have been consistently preaching for the past five years.   And, considering Salesforce’s Dreamforce is now the largest technology conference in the world, the social baptism that every one of those 45,000 in attendance and many more who were tuning in around the world received was epic.

So, with grace and humility, I have been re-energized.  You kinda either get this or you don’t.  If you do get it, I hope you’re rejoicing. I know I am.  If you don’t get it, don’t worry, it will benefit you too despite your willingness to embrace it.

If you are a believer, or just socially curious, I highly recommend you watch Benioff’s keynote.

Finally, Mr. Benioff, if you’re listening, all I can say is Thank You from the bottom of my bottomless heart.