Choice, Circumstance, Context: The Hilton Hotel & The Vagaries of the Customer Experience

For whatever reasons, the hospitality and travel industries are amazing for providing an endless fount of stories. These stories could almost be called, in a strategic sense, individually customized services discussions – but that resonate with other people. Of course, while it does feel like these are stories of things that happened to YOU– and you only, truth be told, they really are easy to understand.Travel experiences (hotels, airplanes, trains) are built around what is a very emotional set of events. There are expectations that are pretty redundant from event to event, occurrence to occurrence. The expected quality of the service or event is about the same from venue to venue. In the case of a hotel it would typically be:

Needless to say, I can go on and on. But, its these things that as more than a sum total, that make up components of a customer’s experience at a hotel. What the hotel chooses to do at these impact points can make or break how a customer thinks about the hotel, or more importantly feels about the hotel. If the bad is not just coincidental but is perceived as either a company policy or bad conscious choice, then there is a higher premium placed on the impact of the experience for the customer. 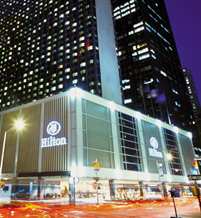 I’m going to skewer the Hilton Hotel in midtown Manhattan – use them as an example of exactly that – bad choice that seems to be either conscious policy or poor on the spot decisionmaking. Unlike the Ritz Carleton, or much of the Marriott chain, The Hilton, at least to me, has no more than a generic customer experience strategy. Walking in to the Hilton, my overall expectation was that it would satisfy my needs, not exceed them, because that is minimum standard that all hotels operate on, and I can expect faithfully when I check in the note. But this particular Hilton, made some small bad choices that led to a horrible experience, which because it was repeated with others in one fashion or another, had a bad business outcome.

Why Was I at the Hilton in NY?

Simple. It was for the CRM Evolution conference for 2011, which for the first time was at the Hilton on Avenue of the Americas, which, incidentally, is called 6th Ave, by any proper New Yorker. The conference, which lasted from August 8-11, pulled together a broad spectrum of very high powered influentials in CRM and smattering of social influencers, a significant number of vendors, the largest group of practitioners in the conference history. The unofficial number of attendees for the conference, which I heard from one of the principals was 500 in total. I chair the conference annually,and as long as the good burghers from Infotoday ask me back, I will be back. On a sidenote: They did ask me back for 2012, which I happily accepted. I really like chairing this conference).

To put everything in a nutshell: The conference was a significant success, the Hilton Hotel wasn’t.

The Hilton was this year’s venue and the reason for it was that both Internet connectivity and the treatment of meals was supposed to be a step up from the Marriott Marquis – site of the last several conferences. Let’s just say it was and it wasn’t.

My wife and I blew into town a couple of days early to catch Wicked at the George Gershwin Theater on 51st St where it has been running for eight years. I’ll digress for a second and tell you this: outside of an iconic performance of “Man of LaMancha” which is seared into my soul for all eternity, this may have been the best musical that I’ve ever seen with only “Billy Elliott” competing and I’ve seen dozens of musicals.

Okay, back from the commercial. In any case, this was a first for me, staying at this particular Hilton in NY. I’ve stayed at Hiltons and some I’ve liked and some have left little impression on me, but none has really gotten me p.oed before.

I’m going to number this sequentially.

One additional factoid – David Myron, the jefe of CRM Magazine and sponsor of this conference told me that he’s had more complaints about this hotel than in the three years preceding when the conference was at the Marriott Marquis, which was no great shakes either.

So, now, you have the chain of events. Let’s look at what this means for thinking about customer experience – how it works in the minds of those that are customers – especially in emotional industries – like hospitality.

Customer experience is something that has been at the core of CRM since day one of its existence. Even though CRM had a decidedly left-brained bent and was based on a company’s operational activities, at least its stated purpose was to improve the experience of the customer in his or her dealings with the company. It often failed at its stated purpose and instead, became identified with the use of technology to automate processes that would support the operationalization of sales, marketing or customer service. But its fundamental purpose never went away. Even disgruntled former CRM supporters admit that much these days.877u7y

So when someone like me tries to place the Hilton experience in a CRM context, its always based on a simple reality. As an individual and as a CRM practitioner, what did Hilton do that p.oed me with the individual hat and how would I go about fixing it with my practitioner hat.

What I’ve come to understand over the last several years, and like all of us, have probably always known, is that a few poor choices can enhance the negative feeling around what would be circumstantial instances because of the context that they were in when they occurred. To put it in terms that the GunningXXXX Index would probably prefer:

When companies make consciously stupid decisions on how they are going to treat customers – when they have a choice – the negative impact of the bad things that happen that they didn’t have any choice is amplified greatly. Why? Because they occur in a framework of dissatisfaction to begin with.

That is simply what we mean by choice, circumstance and context.

Think about it this way. What if:

Three choices that the Hilton made in the early part of the checkin experience.

Think about it. If you had a benign or good early experience, how would you have felt about a lamp that was out when you got there? If you weren’t already irritated, would you have even paid attention to and thought about the ridiculous pricing tiers for Internet connectivity? The lamp wouldn’t have been a source of irritation, it would have been a service request. The 3 tiers might not even have come to your attention beyond making a choice. It wouldn’t have meant much at all.

Now, the room service was a problem. Choice? No. Circumstance? More than that. But because of the three little irritations at the beginning setting the context, the room service lateness became a major irritation. What’s interesting here is how they might have remedied it – and didn’t.

I was at the Marriott Marquis in San Francisco for salesforce’s Dreamforce 2011 conference last week. I was in the bar with Accenture CRM practice leaders and ordered some food. It took more than 30 minutes. When I talked to the bar attendant about it, she went and found out what was wrong, took care of it, had the food out in 5 minutes, and without any expectation on my part of anything else said, “I’m not charging you for it.”

Wow. Thank you. I like this place. Contrast that to the Hilton, who should have offered something. Free dessert, no charge, a free drink from the menu or something as an apology rather than the “I’m sorry” that they offered the first time it was late and the second “I’m sorry” the second time it was late. But they didn’t. So rather than rectify a situation, they exacerbated the irritation that had been building due to the lateness of the food twice and in the context of a bad initial experience that day.

Remember, the effects of small bad experiences in emotional industries like hospitality tend to be cumulative, not singular.

The Business Outcome of Bad Experience

So now you say, meh, what was that all about? All that explanation for so little a result?

Customer experience is, and always was, the foundation of CRM – and the business outcomes that are what makes it something that we’ve always thought important. But there is only so much of the customer’s individual experience that is controllable by the choices that the company makes. But making those small choices and being sure that they are made as repeatable ones and at the same time, providing the environment to support the smart decisions so that the employees are making the right decisions by nature. Then other circumstantial things become less problematic because the contesxt is good.

And then, maybe CRM Evolution stays at the Hilton.