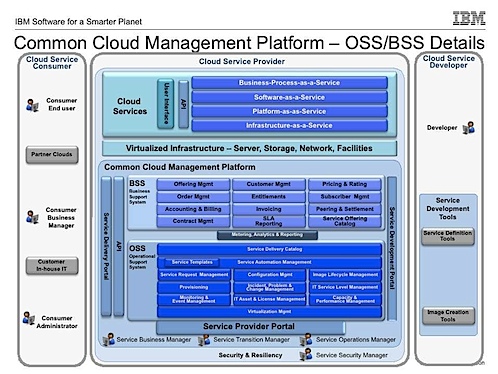 For sometime now – ever since we said “SaaS” instead of “cloud” – us analysts have been beating up IBM about not being cloudy enough. Well, they sure jammed out head in a bucket of water this year. The burger diagram above seems to have captured just about every nook and cranny of cloud computing. I think you can even see one little box that says “simple” in there ;>

And that’s the damned if you do, damned if you don’t problem for IBM an the cloud. If they keep it simple, we all assume they have nothing. If they show-off how detailed they can understand and model it, those of us not in a burger-induced coma (like me), will do a reverse emperor in no clothes on them: they’re too baroque.

Truly, for those architecture-by-magazine types, IBM looks to have an impressive cloud story now. Is the CIO demanding cloud technology? Well, not only can IBM serve up a 50 course meal, they can detail why you should eat every bite.

While cloud floated into just about every talk, Tivoli’s VP Strategy and Product Management, Wing To dived the most into it from the IT side (that is, not from the SaaS pie Lotus served from). Aside from giving us analysts a well deserved blizzard of cloud boxes (which I hope they don’t give to customers unless they really, really want it) he nudged up against the most important aspect of why cloud computing seems like it’ll matter for mainstream IT: delivering software faster, or, as Lauren States put it, the “pressure to accelerate the delivery of function.”

As Wing To outlined with a couple cases – esp. one from Korea’s SK Telcom – companies are being pressured to deliver new IT-driven offerings (IT-driven “services” that their customers use) more frequently for ever, usually of smaller scope and value, but in aggregate huge differentiators for the companies. That is, “dumb pipe” companies like telcos, cable operators, and others who’re looking to sell services beyond sheer utility that their customers care about and will pay for. The cloud pivot point here that anyone from IBM (or any other elder company) will all but say is that all that traditional IT they’ve been sold over the years isn’t agile enough. They need something different, faster, more agile, and (many would say) cheaper. Salesforce is the Luther here, but we’re far from mass-schisms. 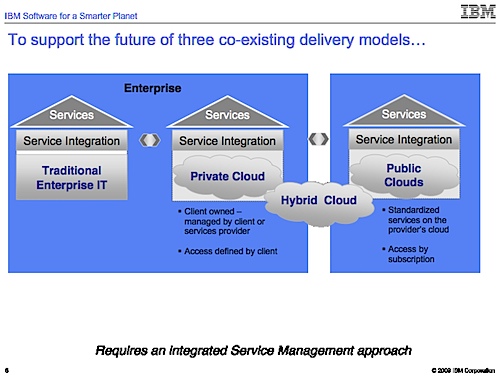 Most of the focus on IBM-driven cloud computing was in getting from here to there and the effort actually looked like it’d be hell. More generally, this is about how much transition work cloud computing as a mainstream IT practice needs. Short of skipping the whole thing and going public cloud or really skipping the whole think and going SaaS, many companies are in for endless bowls of legacy porridge.

On the bright side, the reality will probably look more like small, spike-like projects that get applied more broadly, starting with modernizing (or just getting) automation frameworks. Like I said: if IBM started with the lean burger, we’d jump on them for not having the fat burger.

And that’s the whole thing: what are the drivers to manage your own, private cloud? They usually boil down to non-technological constraints like regulations, the need for control, and customization. On the last item, To summarized an interesting customer sentiment: we want to make sure there’s choice, the customers have been saying, but not too much choice.

There’s something missing from all the private cloud talk, and, short of public cloud and SaaS adoption over private cloud baby-steps, that missing thing seems to be forcing developers and operations to be on the same team. IBM seems to be mounting that horse with their Rational/Tivoli dev/ops aligning, but that’s just beginning. Much of legacy IT is too creaky to benefit from both Agile Development and Agile Infrastructure and I’m hoping we’ll see more from cloud vendors to protect cloud computing from legacy gangrene.

Disclosure: IBM paid T&E to the event and is a client. See the RedMonk clients list for other relevant clients.