There were a couple Lotus sessions at this year’s IBM analyst summit, Connect. Overall, Lotus seems to finally be in a good position with respect to modernizing its previously antiquated offerings and has rapidly built up impressive numbers in the SaaS and social networking business. They’ve been working on this for awhile now, and this year, to hear them tell it, they’ve finally delivered. 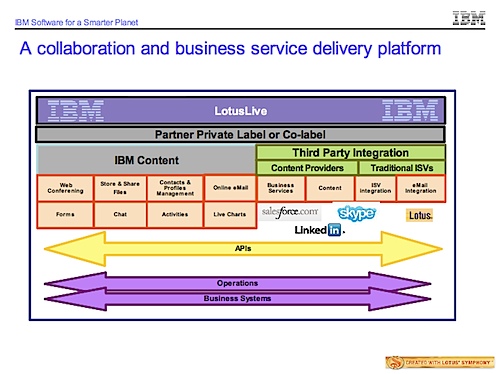 The first session, presented by Bob Picciano and Sean Poulley, covered LotusLive, Lotus’ SaaS offerings. Here and across on-premise Lotus, there were many impressive numbers and as James pointed out, while folks like Salesforce are launching social networks, Lotus seems to have a huge number of installs already and much more in the works.

The cranky-pants issue with Lotus in the context of the software group is that Lotus tends to sell as applications, ruining the whole “we just do middleware” Software Group line. The pricing of things like iNotes is clearly a move into non-enterprise pricing and selling. The good side is that Lotus should provide an example of IBM converting its offerings to a more cloud centric delivery model. If Ray Wang’s on-premise vs. SaaS trend spotting is correct, ISVs have some serious writing on the wall to deal with: namely, going SaaS.

To the actual meat: the Lotus Connection offerings are really behind the firewall or SaaS versions of services you could cobble together with public Web 2.0 and social networking sites – except that the cobbled Connections would be in the public, under “we co-own your IP” EULAs. Instead, there’s our typical, enterprise prayer beads: security, policy enforcement, integrations to other systems and infrastructure (and services like Salesforce), and the catch for enterprise salvation, compliance. Queue the jokes about execs in orange jump suits! 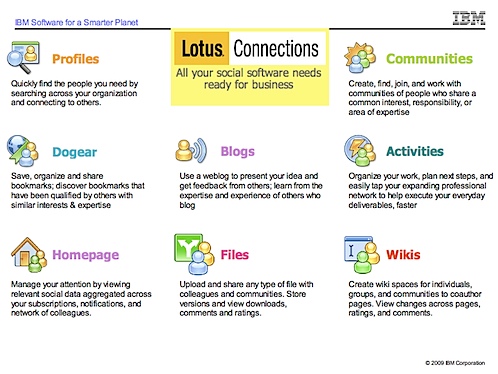 In another session, Jeff Schick and Irene Greif went over existing Lotus Connections technologies. After Jeff covered some impressive numbers for Lotus Connections, some cases, and an overview of functionality (see the break-out above), Irene went over some research projects (out of many in the social space) that may surface as products one day. That’s a likely path as many of Lotus’ social networking applications followed a similar route.

This project was all about tracking what users do in communities (like Lotus Connections) and even on their desktop (like viewing a presentation). The goal being to get analytics on what users are doing in these social networks. I asked what you’d do with that data and Irene said there are the obvious things like seeing how active a community is, but also bumped up against using the analytics to better tune the community and, presumably, the process in IT.

Here, we have a service for taking recorded Unyte sessions (or other sourced video?) and adding in follow-along transcripts and timeline tags. Wrapped up in that, of course, is searching over the text. The goal was to get people using video more as a resource which, Irene said, most people don’t really do – preferring text, I presume.

I asked if all the meta-data (time-coded transcripts, tags, etc.) was in XMP or some other open(ish) media format. The point being this meta-data infused, otherwise “incomprehensible media” (as Dan Farber once dubbed video) could be created and/or used outside the player we saw. It seemed like not, though Jeff jumped in and said that some media-production oriented customers had expressed interest in something along those lines. I also incorrectly called it “XMPP” instead of “XMP.”

Creative Suite uses XMP, and their video editing tool-chain has some of the potential here, but CS4 is not really an application along these lines, just tools to produce the content for one. Note to Adobe, then: this is all good stuff to add to Acrobat.com.

Covered quickly at the end, the idea here was to rich up email so that folks who wanted to could stick with email as their all-in-one tool. If the amount of complaining from the 2.0 freakoid crowd about the lack of email integration in Google Wave is any indication, email ain’t going away anytime soon.

The Challenge – Keeping Up

While the portfolio looks good now, this category demands rapid innovation, delivery, and then catching up when you’re caught driving too slow. Getting to this point has taken Lotus a long time, and hopefully the more cloud-centric model means they can avoid getting in a rut again. Cocky startups with little more than a gut feeling for how to spell “enterprise” can and have been making mean donuts in the collaboration parking-lot, detracting from a slow moving 16 wheeler like Lotus.

Thus far, aside from Outblaze, Lotus has followed a very non-acquisition fueled path (perhaps indicating that technology in the collaboration space isn’t “defensible,” that is, it’s easy to code it up on your own instead of having to buy the company) so it’ll have to run a super-efficient development and release engine to keep up with the Enterprise 2.0 donut crew.

That crew has their own problems – see the enterprise rosary above – and other elder companies like SAP have similar problems (and, even worse, bi-directional Stockholm syndrome), but tend to buy themselves the needed catch-up. From past performance, I have to be professionally skeptical about Lotus keeping up the pace, but it’d be great to be proven wrong. That said, what they have now looks good, and the key for IT decision makers ongoing is getting a gut feel for how long Lotus can keep it going.

Disclosure: IBM paid T&E and is a client. Adobe is a client as well. See the RedMonk client list for other relevant clients.