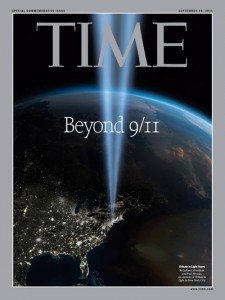 I saw yesterday morning the print edition of the TIME 9/11 special issue but even more impressive are the video interviews of the people profiled in the issue.  The site is here.

Each will move you – some are still angry for what they lost, some like Stanley Praimnath so grateful for their miraculous survival from the Twin towers, some like Lyzbeth Glick Best are amazingly graceful for what they lost (in her case her husband on flight 93), some are just plain heroes (Jim Riches, retired fireman looked for months for his fireman son who died in one of the towers and says “I’m one of the lucky ones. I found my son’s  body’s”. His three other sons joined the NYC Fire Department in the ultimate tribute to their dead brother).

Even after a decade, the memories seem so fresh.

“There was one large way in which America and Americans should’ve and could’ve changed but did not. That would have required President Bush to announce an urgent national project for the post-9/11 age: Because our dependence on oil is ultimately what sustains the jihadist pathology, he could have said, we must start reducing that dependence as quickly as possible. In the emergency can-do window of 2001 and 2002, he could have rallied Congress and the public to support a serious, sensible, radical new energy policy, including significant new taxes on petroleum.

But he demanded nothing of most Americans. “We will rid the world of the evildoers,” he said, but the armed forces and intelligence community — a tiny proportion of us — would take care of that. The other 98% were encouraged only to keep calm and carry on. “Do your business around the country,” the President said in September 2001. “Fly and enjoy America’s great destination spots.” “People are going about their daily lives, working and shopping and playing,” he said two months later, “going to movies and to baseball games.”

Yes, right, good: we were not cowed. But with the insistence that American life should not change a whit, we implicitly declared that the era of irrational exuberance would proceed and accelerate.”

Compared to the harrowing experiences of all the heroes of the day, my 9/11 was tame, but in memory of that fateful day, I decided to live through the day through my digital archives of travel receipts.

I was at a conference in Baltimore, MD on 9/10 and was planning to go into Washington, DC on the 11th and fly out of National airport. Instead, I managed to arrange a prospect meeting at a bank on Wall Street in NYC on the 11th. I decided to rent a car from Baltimore and have breakfast with a client on the way.

I checked into the Hampton Inn in Willow Grove, PA at 1.21 am and picked up my client at GMAC, Cyndi Joiner in the morning and we went to Otto’s in Horsham, PA for coffee. Among other things her job brief included real estate and logistics. While we were at breakfast she apologized for taking two calls ( probably related to the planes crashed into the two towers around 8.46 and 9.03 am) and after the second call told me she had to cut breakfast short. Something had happened in Manhattan and she had to get back to inventory property and personnel there. My digital archives show I signed the restaurant check at 9.14 am and Cyndi told me on the way out – “You  may want to rethink driving into New York today – something’s not right”.

So I went back to the hotel and called my New York appointment. If any one knew someone local would. Turns out he had not watched TV or heard of the two plane crashes. He said “Even if Wall Street is a mess, Queens (where he lived) will be fine. Let’s meet here”. I agreed, then heard on the  TV in the hotel room that American 77 had hit the Pentagon. I called him back and we agreed to cancel our meeting.

My planning now changed to finding a flight home to FL. Could not get through to any of the airline reservations.  Surely Amtrak would still be running. My Amex statement shows an Amtrak charge on that day for $ 179. I booked myself a web ticket from Richmond, VA to Florida.  I called my wife and she thought I was crazy to take such a long train ride. Airports will be open in a day or so she said. Just wait it out. I decided to ignore her optimism.

I still had my rental car – all I had to do was to tell them I would return the car to a different location. The car agent was frazzled but friendly. Hold on to the car, he said, just allow me to put a hold for a $ 500 drop off charge on your credit card. It should be a much lower charge he promised, just we are slammed right now so can only give you an approximate charge. I agreed and started to drive towards I-95 to head south. Then it hit me all the traffic from NYC and Washington would be piling up on I-95, so I stopped at a gas station.

My receipt shows it was a Robert Bulson Exxon Mobil in Willow Grove at $ 9.36. My hand scribbled notes say “maps for the drive.”  The receipt shows the time as 10.55 am. I asked the store attendant for directions. He told me to take the Penn Turnpike to I-81 South to I-64 East to Richmond, if I wanted to avoid I-95. Of course, neither of us knew that the 4th plane, UA 93 had crashed in Shanksville, PA further up the Turnpike towards Pittsburgh just a few minutes prior.

That drive was one of the spookiest I have ever done. On the one hand driving through serene West Virginia seemed so peaceful, on the other there were still hundreds of planes in the air and the radio was full of talk more of them may had been hijacked with no clue where they might crash land. I got off on I-64 to head towards Richmond, but decided to stop at what my receipt shows as Goose Creek Shell in Fisherville, VA. I remember calling Amtrak from the phone booth. (Cell phone service had been spotty in the hilly region I was driving through and the network congestion from the day’s events). After 15 minutes of being on hold, I decided against the train option. Got back in the car and decided I would drive the 850 miles home to Tampa. Called my wife, and she thought I was even crazier to do that.

At 922 pm that night, my records show I checked into a Hampton Inn in Charlotte, NC. Turned the TV on, and watched all the horrendous scenes of the day. It did not sink in back then I had been within a couple of hundred miles of each of the 4 planes, and with slight changes in plans could have been even closer to each. I thanked my stars I still had a car and was only 600 miles from home and planned an early start the next morning. I had to be home – with my family and there for my family.

So, today I will celebrate my luck – and all the heroes from that day and from our battles since. And yes, give a bit more thought to the Andersen column on how we can make the next decade a bit less violent and a lot more enjoyable.