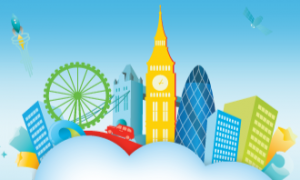 We’ve heard this message before from Salesforce.com CEO Marc Benioff, of course, but it was delivered with some especially gruesome imagery in a Q&A session with media and analysts at Cloudforce London today. Answering a question about companies that don’t embrace Salesforce.com’s message of the social enterprise, Benioff warned: “They’re not going to be around in five or six years. The world is just gonna snap them in the neck.” Perhaps it was the jetlag speaking.

That set me wondering what the priorities should be for such companies. Benioff cited Toyota as an example of a company that had got the message and embraced the social enterprise by putting Chatter in its latest models. But while the social component is being delivered from the cloud, the motor company’s core systems are still running firmly on-premise. In the morning keynote, Benioff shows off a diagram on a napkin that describes the social infrastructure of Burberry, another recent ’social enterprise’ convert. Clearly visible at the foot of the scrawled schematic is the interface to the company’s SAP business systems.

Another questioner at the media lunch crystallized what was going through my own mind: Did the new emphasis on social mean that cloud was now less of a focus? “We were born cloud but we’ve been reborn social,” answered Benioff. The most important strategy for enterprises is to connect to their customers using social, and the traditional vendors are not supporting this, he said.

It was clear from his answer that Salesforce.com has made a choice. The imperative for customers of its software is to forge that social connection with their own customers. Salesforce.com delivers an infrastructure that supports those connections and also, via Chatter, carries the collaboration inside the enterprise to connect with their existing on-premise systems. That’s plenty enough sales opportunity right there to be going on with.

The corollary is that Salesforce.com is not really bothered for now whether customers replace those internal back-office systems with cloud equivalents. It has partners like Kenandy, FinancialForce.com and others that can test out the opportunity to go further in that direction and it’s happy to leave them to it.

The message, then, is that enterprises wanting to avoid the imminent sudden death that Benioff predicted will do enough if they replace on-premise front-office and collaboration streams with the Salesforce.com cloud offering. They don’t have to move all their systems to the cloud; it’s still OK to own servers, so long as they stay firmly out-of-sight in the back-office.

I couldn’t help wondering, is that really true? What happens when you’ve implemented a cloud-based, customer-focused social strategy in your front office? How can you survive your customer’s round-the-clock, real-time demands for instant response if your back-office systems are still operating in the dark ages? You may have avoided the trauma of sudden death and bought yourself some time. But have you not instead condemned yourself to a slow, lingering death instead? (One that you have to endure in full, interactive sight of your customers).

This was the part of the answer I had expected to hear from Benioff but didn’t. You have to go social, and mobile — those are the priorities, the goals to focus on first and foremost. But if you don’t also have a strategy to go cloud, you’ll still lose the race in the end because you will reach a point when those internal systems just can’t keep up any longer. For the next few years, established businesses are going to have to go through change after change after change; not just putting social lipstick on the customer interface but reforming the way their businesses operate from front to back. Change or die isn’t a one-off choice, it has to become a way of life.

One response to “Enterprises must change or die, says Benioff”