Earlier this week I was in Toronto to give a keynote presentation at Innotribe, a social media confab within the enormous Sibos financial services conference. I always find it interesting to see how industries that have significant and interesting challenges in adopting social media talk about the issues they’re encountering.

The basic concerns are well understood: Financial services, medical institutions, and law firms all have serious challenges with regulatory and compliance beyond the standard ones that any large company, particularly public ones, have when it comes to engaging with the world via social media, even internally with their own workers. Count the challenges you might be having when it comes to adopting social media in an ordinary firm, then triple them when it comes to the obstacles these organizations face in getting started.

I found the Innotribe event itself — sequestered as it was beside the main conference that consisted almost entirely of attendees from the finance world in full suit and tie — an intriguing mix of the avant garde and traditional show-me-the-ROI concerns. Aimed at exploring a wide variety of current emerging technology topics including social analytics, digital identity, big data, the event helped me bring to the surface the ongoing challenges that a foundational industry of the global economy is facing as it tries to make its way into the 21st century. 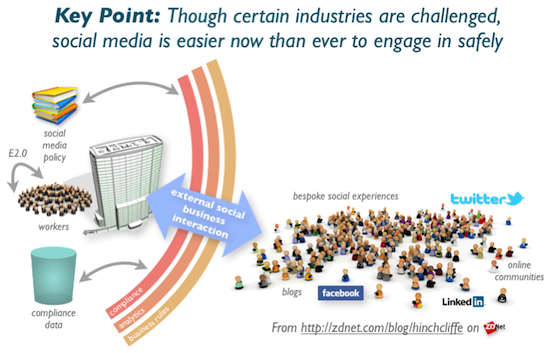 Let’s put aside for now that virtually all major financial firms have been dramatically buffeted by the events of the last three years, or that many were found wanting in terms of integrity and behavior. Instead, let’s focus on how they work today. One of the key points made at Innotribe was that many financial industry firms fundamentally make their living by profiting from information scarcity. The idea is that they have more information than the market does as a whole and can profit from the arbitrage created by the disparity between the those-in-the-know and the know-nots.

Is finance at odds with social media?

This then, at its root, more than other “difficult” industries, often puts the business strategies of financial services in sharp contrast — direct opposition even — with the basic premise of social media, which essentially says that the most productive and useful conversations are ones that are the most open, transparent, shared, and participatory. The contrast is certainly far from insurmountable, yet it contributes to a general sense in investment and banking circles that social media represents a foreign way of operating. I’ve worked with financial services firms on their social business efforts closely in the past and the conversations with them all to often — and significantly more often than other types of companies — get wrapped around proverbial axle on a whole spectrum of issues from culture and business models to regulation and governance.

For those paying attention at Innotribe, the contrast couldn’t be more evident than the presence of Doc Searls himself, whose key role ten years ago in the Cluetrain Manifesto and its 95 principles, are nearly a laundry list of how financial services and other regulated and/or closely held industries still do NOT work, while much of the rest of the world has begun to move on. However, speaking with Doc, I sensed that these issues were not front and center for him at the moment. Rather the definition of money itself in the social business era was his concern. And in fact, social currencyand other novel forms of digital money such as Bitcoin, were certainly of significant interest to attendees.

Towards the end of the first day, conference organization Matteo Rizzi asked the question that goes directly to the heart of the current frontier of social media (and whether regulated firms can even play): “How can banks use social data safely?“.

Given that business intelligence from social channels, the latter now the primary form of communication on the planet according to many sources, will be a major driver of business opportunity in the near future. The concern here is that financial firms and others will be prevented by laws and regulations that limit their ability to modernize and engage with the world using the many new digital methods that are relevant today, includingsocial analytics and business intelligence.

Longer term, the worry is whether the notion of banking and investment firms themselves will have to be rethought in a social world, particularly as trust levels in these very institutions are the midst of plummeting to level that may ultimately threaten their existence in some cases. Just like traditional media is steadily being supplanted by social media, the same may very well happen to our institutions when it turns out that social, peer-to-peer financial services, which are beginning to actually emerge now, will ultimately change the landscape as we head towards an eventualsocial business economy.

However, as I made the point at the conference, this is — for now — putting the cart before the horse. The eventual disruption of their business by social models for currency is not the immediate concern of most financial institutions. At this point, most C-level executives at large financial firms that I’ve spoken with in the last year are largely resigned to adopting social media and more focused on adoption, with about two thirds of them having basic presence already. Mostly they want to know how to do it safely and securely, with the business advantages coming second in importance, though sometimes a close second. And some executives are more proactive in thinking that social media must be treated as another primary channel for their organization to have competency in.

Personally, I think that’s the healthiest attitude to have at the moment for regulated firms: Not too zealous and not to passive. There’s time to get to the higher value activities down the road, such as Social CRM. But not too long, for firms that have close competitors however.

Fortunately, with the advent of powerful new capabilities that make automated compliance and policy rule checking easy to implement (see Socialware and LiveOffice as just two leading examples), enterprises now have more options that doesn’t involve trying to solve all the hard problems with regulation and social media by themselves. This then, is part of the answer on whether banks will be able to use social data safely, though surely many will think that they shouldn’t.

Surmounting the obstacles to social business

Thus the broad outlines of how “difficult” businesses will be able to engage in social media is becoming clearer. Part of it seems to be a smart and agile approach to the definition, communication, and enforcement of enterprise social media policy itself. In this view, organizations don’t have to do it all themselves, they can leverage the experience of those that have gone before. Second, powerful new solutions can enable automated and predictive processes that now make much it less likely that the company will be exposed to risk.

In this way, cultivating and maintaining a healthy social media policy lifecycle that’s enforced in close concert with legal, HR, and compliance is a key strategy for success. That’s not to say that there aren’t many other best practices for adopting social business or other issues, but for regulated industries, the biggest obstacle is often legal, compliance, cultural, and behavioral, in roughly that order. 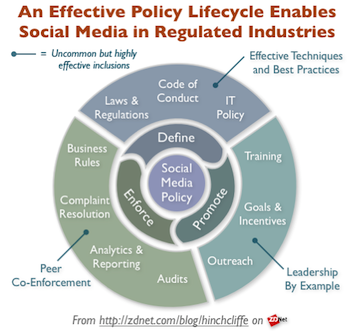 I’ve summarized the key elements for a modern and successful social media policy lifecycle above. It’s a good start and will have to be adapted to your organization. By establishing the right compliance, analytics/reporting, and business rule layers in direct concert with a well articulated and communicated social media policy, most regulated industries can move beyond the early hurdles and begin reaping the rewards of becoming a compliant social business.

As for the slides on social data and financial services from my talk, I’ll post them shortly and update this post. Please ask your questions on social business and regulated industries below and I’ll answer them as I soon as I can.